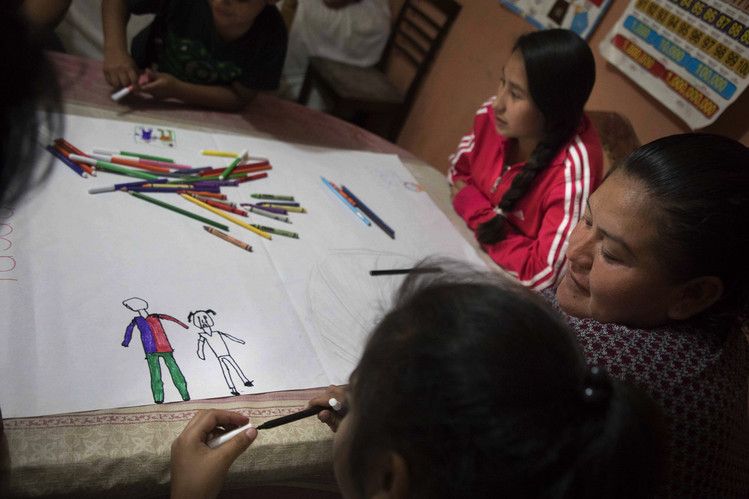 PUEBLA, Mexico—When Lupita Pérez Parra was a young girl, struggling to learn how to read, her mother would punish her by pricking her fingers with a sewing needle. Years later, when Ms. Pérez became frustrated at her own children, she found herself meting out the same painful punishment.

Only after her family nearly fell apart, and after years of family therapy, she says, did she realize she was merely repeating a generational cycle of abuse, disciplining her children the only way she knew how: with threats and violence.

“It’s better to talk to my kids…and try to understand them,” said the 36-year-old, who sells tamales in this colonial city. “Don’t hit them, don’t mistreat them, don’t humiliate them.”

Last year was the most violent in Mexico’s peacetime history, with 33,341 homicides across the country, according to government figures released Monday. Many killings are the result of wars between drug gangs. In Mexico and across Latin America, homicide is well above levels the World Health Organization considers as epidemic.

From police reform to legalizing narcotics to snuffing out organized crime, there are as many potential solutions to the problem as causes of it. But increasingly, researchers, charities and governments are tracing the origin of violence back to its most intimate source: families.

‘It’s better to talk to my kids…and try to understand them,’ says Ms. Pérez. ‘Don’t hit them, don’t mistreat them, don’t humiliate them.’ Photo: Janet Jarman for The Wall Street Journal

Ms. Pérez got help from Together With The Children Foundation, a 30-year-old NGO based in Puebla, Mexico, that helps rebuild the families of street kids and child laborers who have suffered family violence and abuse.

Juconi, as it is known by its Spanish acronym, helped write a 2015 Mexican federal law recognizing the rights of children and adolescents, and helped draft similar laws in Mexican states.

Governments world-wide, from Colombia to the U.K., are working more closely with groups like Juconi to address youth violence, said Isabel Crowley, who runs Juconi.

Behavioral studies and even MRIs of troubled young people show that experiencing violence at an early age is profoundly damaging.

“It literally changes the size of the brain,” said Alessandra Guedes, an expert on domestic violence with the Pan American Health Organization. Even if children are not direct victims of violence but merely witness their mothers being abused, boys are more likely to perpetrate violence and girls are far more likely to be victims later in life, she said.

An unpublished study by criminologists at Mexico City’s CIDE research center and the National Autonomous University of Mexico found that 33% of prison inmates in Latin America had been exposed to domestic violence as children. It also found that being exposed to violence as children was a key determinant of a youth’s likelihood to run away from home and commit crimes.

Juconi is one of dozens of groups in Mexico that is trying to use a model known as multisystemic therapy. The idea, which emerged in the U.S. in the mid-1990s, is that therapy is more effective at preventing violence or treating severe psychiatric problems when it is offered in the patient’s home, at school, or in a community mental-health center, rather than in isolated environments like hospitals or juvenile detention centers. 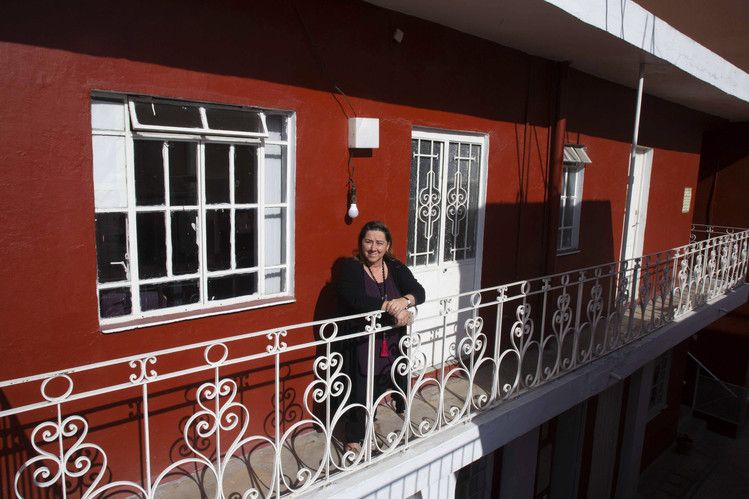 Isabel Crowley is director of Juconi, an organization that works to rebuild families at risk of falling apart due to family violence. Photo: Janet Jarman for The Wall Street Journal

Other recent research suggests that intensive family therapy is one of the most effective tools to reduce violent outcomes in children, but that therapy alone is only a first step, and must be paired with other reforms such as improving policing, schools and health care, said David Finkelhor, a sociologist at the University of New Hampshire who has studied child abuse.

“The idea that youth violence is this intractable, mysterious problem is not true. There is a lot of science to this,” Mr. Finkelhor said. “The good news is that it is possible for a society to bring down the rate of youth violence overall, and quickly.”

Four years ago, when Lupita Pérez first connected with the therapists at Juconi, she was worried that her five children would become violent criminals.

Her two oldest sons, Brandon, now 20, and Christian, now 15, had gone to live with their father to avoid their mother’s physical and emotional abuse. They got into drugs, especially huffing paint solvents, and committed petty break-ins and robberies. Ms. Pérez reached out to Juconi through a relative and began inviting its instructors to her home for weekly family therapy sessions.

For weeks, the therapists just played games, sang songs and drew pictures around the dining room table after school with Ms. Pérez and her three youngest children. Gradually, they built trust, and began talking about more serious issues: Why does mom get so angry and yell so much? What should we do when we get angry? Why is it wrong to hit a child? 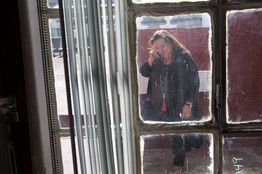 Governments world-wide, from Colombia to the U.K., are working more closely with groups like Juconi to address youth violence, says Ms. Crowley. Photo: Janet Jarman for The Wall Street Journal

After years of therapy, Ms. Pérez noticed she stopped taking out her anger on the children. She relied instead on a printout of an “emotional thermometer” that she keeps hanging in the family’s tiny concrete house, to explain to the children how she was feeling as her stress and frustration grew.

Soon, she began to see Brandon and Christian again, in weekly therapy sessions. Christian agreed to go to detox for his drug use, then later moved to a house for adolescent boys run by Juconi. Brandon began having long conversations with his mother for the first time, got a job working at a jewelry business with his father, and found a girlfriend.

Without the intervention, Ms. Pérez said, her two oldest sons would likely be in jail or members of street gangs.

Juconi therapists describe a painstaking process to earn the trust of both parents and children who come from extreme poverty. 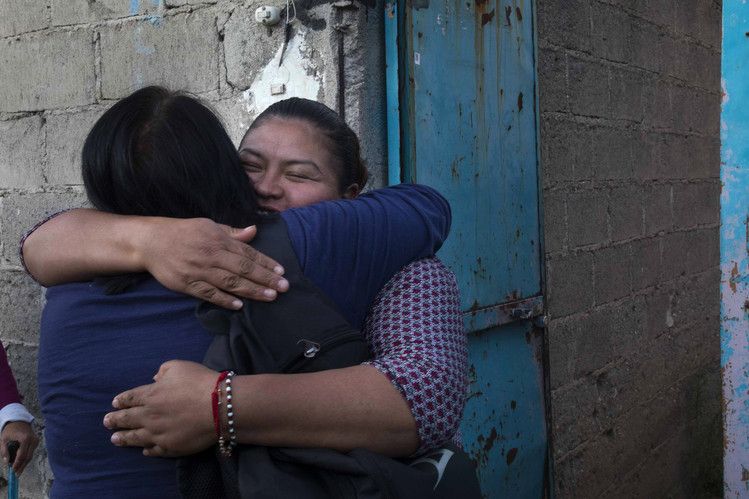 ‘You start to notice that, when you allow a family to create a structure, everything changes,’ says Alejandra Lopez Jimenez, left, seen here hugging Ms. Pérez. Photo: Janet Jarman for The Wall Street Journal

Alejandra López Jiménez, who has worked as a family counselor for Juconi for 21 years, recalls the case of Alfredo, a boy from a village in the rugged mountains near Puebla who was arrested at around age 12 for robbery. Alfredo had run away from home after his father, a ranch hand, had slashed his mother’s arms and belly with a machete in a jealous rage.

The first few times Ms. López visited Alfredo’s mother, she would shoo the therapist out the back door when she heard her husband coming home. Once, the husband, suspecting his wife had hosted a secret visitor, pulled out a pistol and shot a chicken in the backyard as a warning to his wife.

After months of visits, Ms. López finally confronted the husband and convinced him to join her and the wife in therapy sessions. After several years of intensive family therapy, the family reunited. Alfredo, now 24, got a job as a tennis pro at a country club in Puebla, and later became the personal secretary to a wealthy businessman who played tennis there.

“You start to notice that, when you allow a family to create a structure, everything changes,” Ms. López said. “They start to fix up the house for the weekly meetings. It makes them feel important. And these are families where no one has ever told them, ‘You have value. You are important.’”

—Juan Forero contributed to this article.

Write to Robbie Whelan at robbie.whelan@wsj.com

The Bidens and Beijing - WSJ

Hunter Biden to hold 10% for the “big guy,” but did he forget to set aside 37% for Uncle Sam? A tax investigation focused on the Biden family’s highly questionable sources of $…

How crazy does the violence have to get before it costs the Harris-Biden campaign the election? (Nomenclature update: On Monday, Kamala Harris)[ ](https://www.youtube.…