We Put 4 Potato-Mashing Techniques to the Test 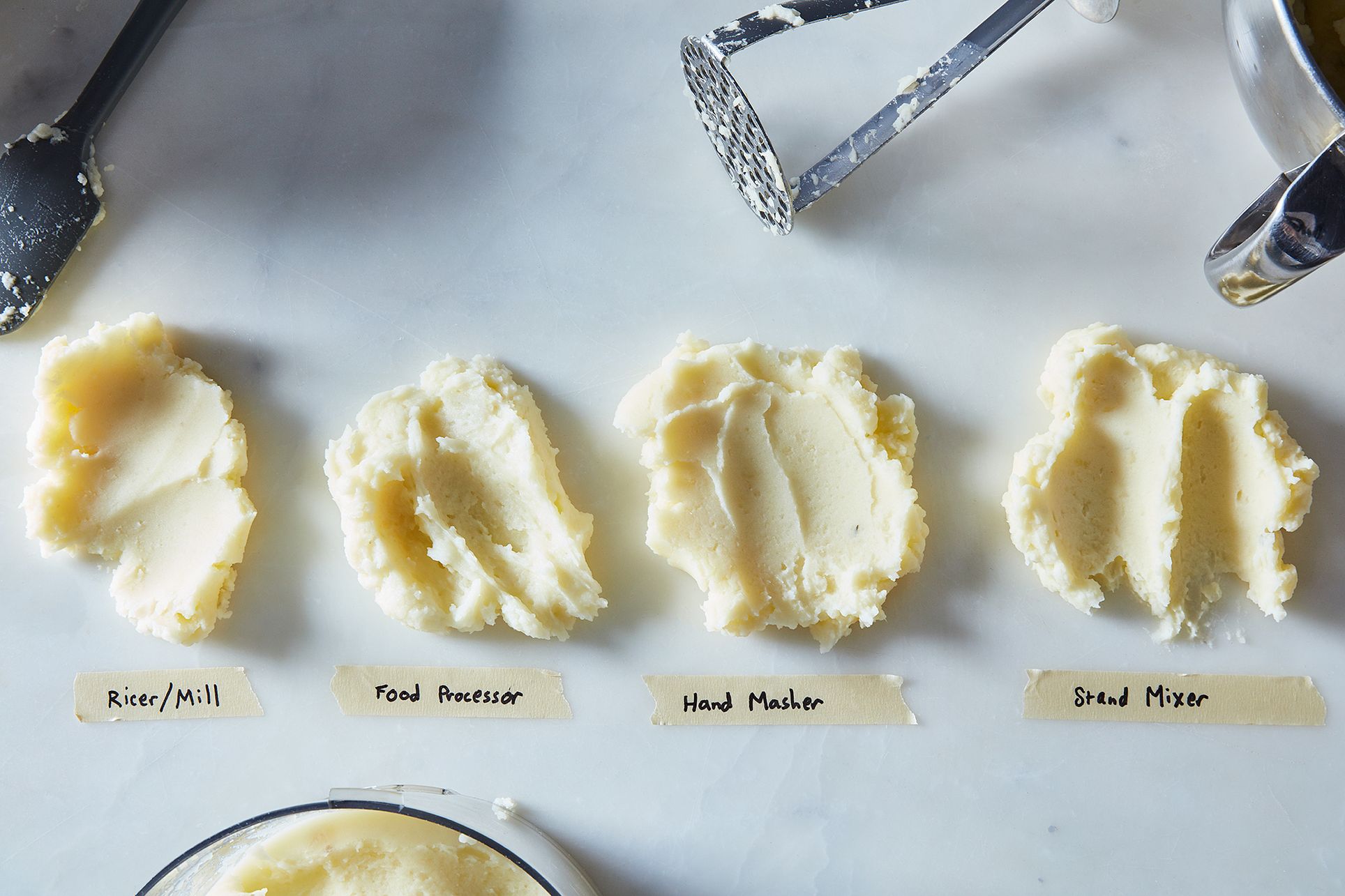 We Put 4 Potato-Mashing Techniques to the Test

On Thanksgiving, mashed potatoes are, for many, an integral part of the meal, with its craters serving as tidal pools for gravy and cranberry sauce. To mess them up is a tragedy disappointment. But making good mashed potatoes isn't only about the recipe you choose: It's also about the technique you use to execute that recipe (or, if following the method as written, knowing what type of final mash it will produce).

We put four methods to the test so that you can use the technique that's right for you—whether you're looking for potatoes that are creamy (hand-mashed), silky (food-milled), or glue stand-ins (food-processed).

The general principles are as follows:

You can use these rules alone to anticipate the mashed potato type any given recipe will yield: The beaten Silver Palate's Thanksgiving Mashed Potatoes, blended electrically, are intended to be denser than Diane Morgan's Classic Mashed Potatoes, which she recommends you pass through a food mill, for example. 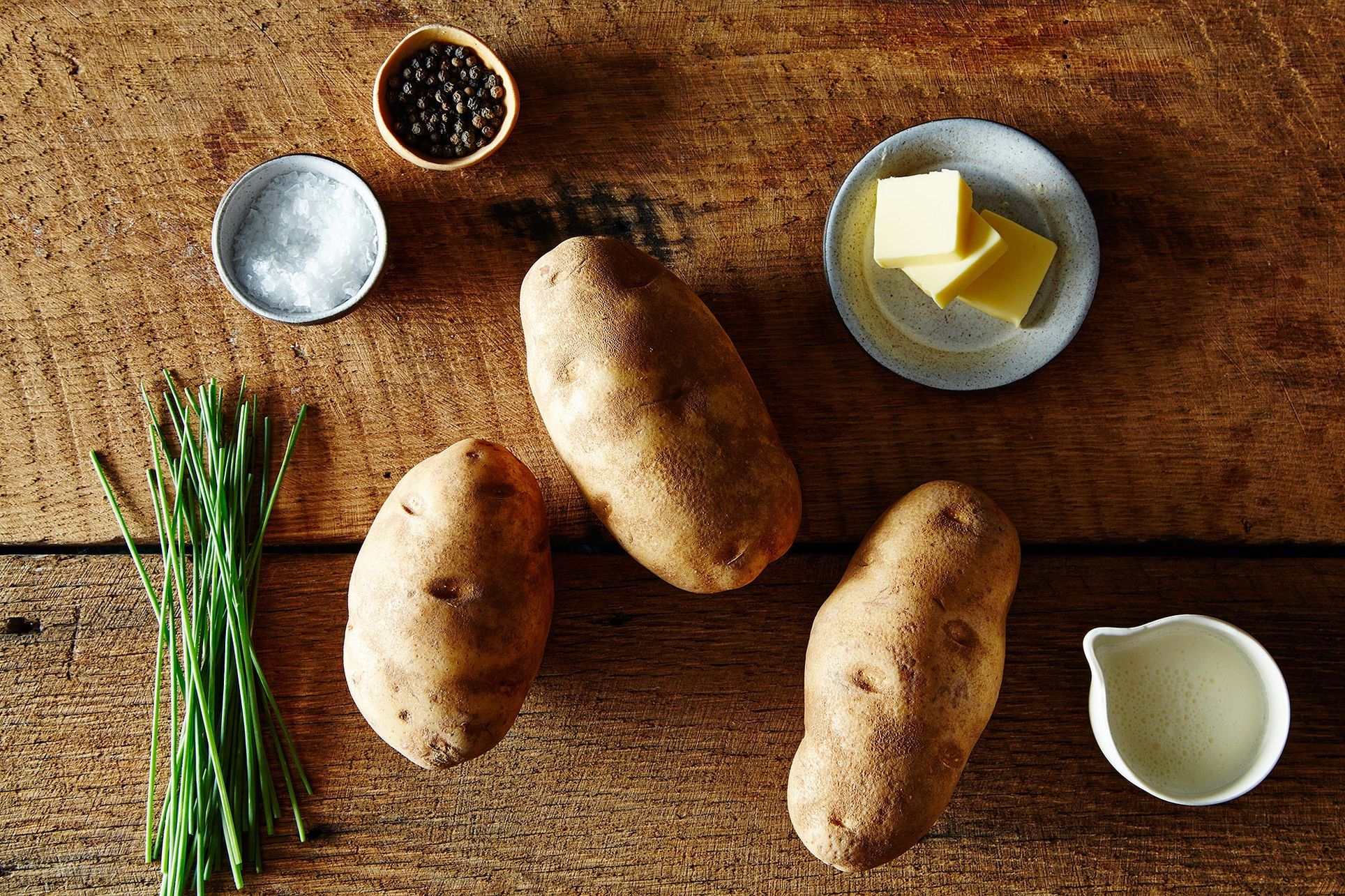 But how does changing the technique in one recipe, while keeping all other aspects the same, alter the finished dish? We made the same recipe—we chose Derek Laughren's Pre-Seasoned Mashed Potatoes because of its simplicity (only for cream and butter (as opposed to sour cream, cream cheese, and all sorts of other complicators)—with four different techniques: 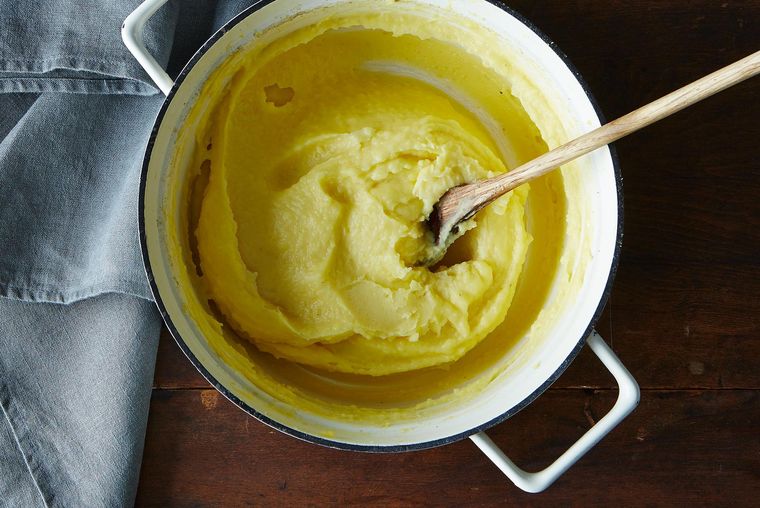 For the first method, we milled the potatoes before folding in the cream and butter. For the other techniques, however, we crushed the potatoes as we gradually added the fats. 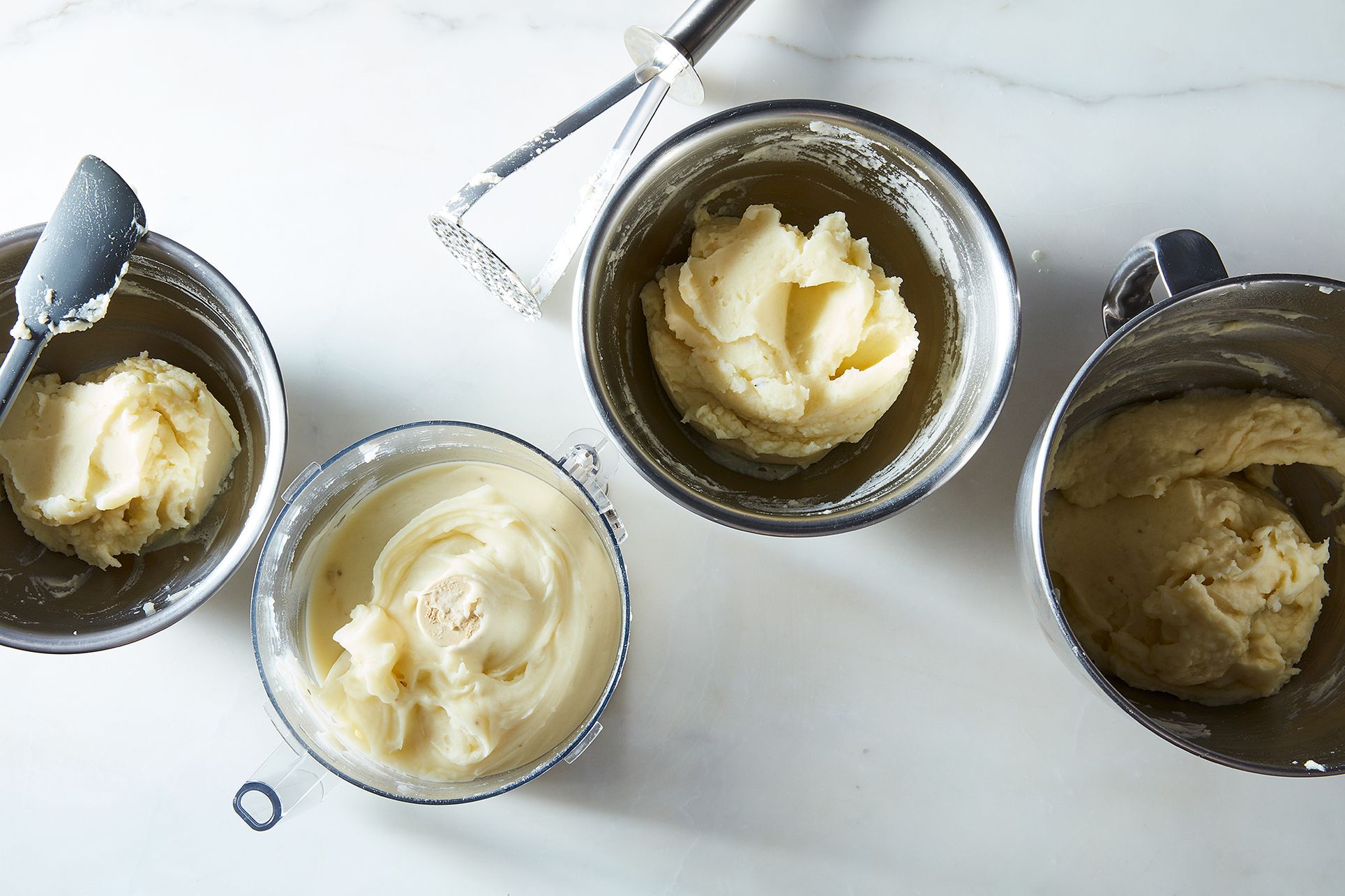 The potatoes that put through the food mill were the smoothest of the bunch, so airy that they're scooped easily with a finger, so light they dissolve in your mouth without any chewing on your part. You'll see in the photo that the milled potatoes form spoonfuls so satiny that they look more like scoops of vanilla ice cream than scoops of mashed tubers. 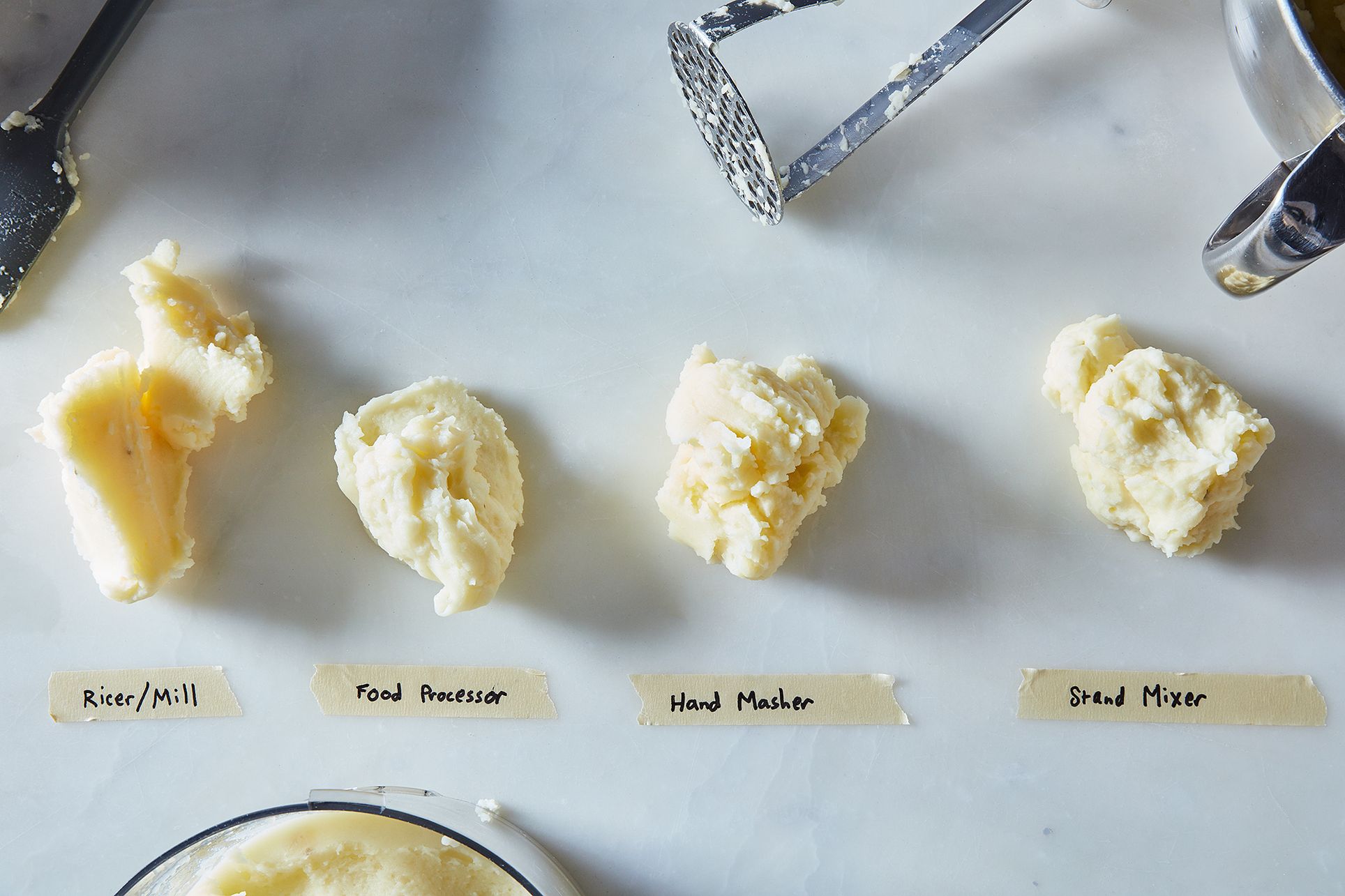 What's the difference between a mill and a ricer? A ricer is an extrusion tool, in which cooked potatoes are plunged through tiny holes (a giant garlic press), obliterating any chance of textural anomaly. A food mill does a similar job, but rather than force the potatoes through holes in a downward motion, it whirs them 'round and 'round, using centripetal and downward pressure to force them through the perforations. While mills are less gentle than ricers (thereby producing potatoes not quite as fluffy), they're more versatile around the kitchen. 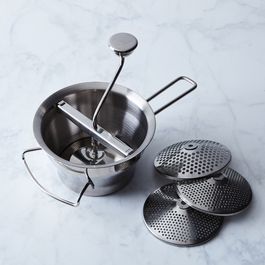 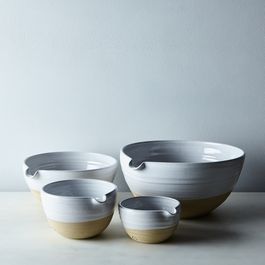 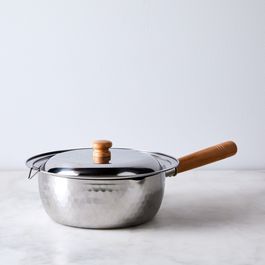 Our team called the milled potatoes the "lightest" but also "bland," "ricey," and "grainy," with "not so much flavor." 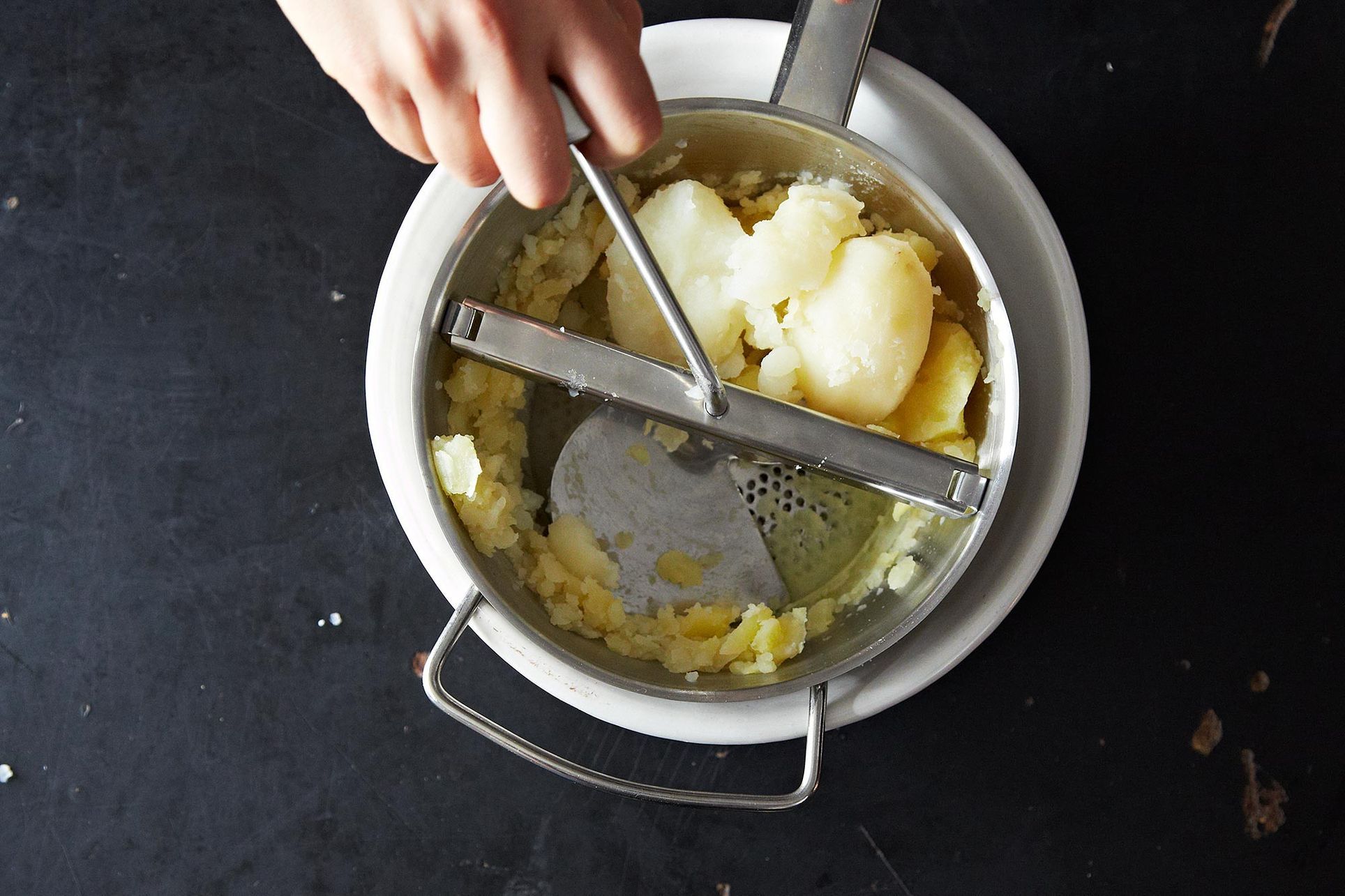 The potatoes blended in the food processor were far and away the stickiest, glue-iest, and glom-iest—it was difficult to even spread the scoop into an even swatch.

“I made mashed potatoes using one, and they came out dense and creamy rather than fluffy. This would be because…

While some Food52 tasters called the food processed potatoes "gluey" and "sticky," others said they were "rich and buttery," "custardy even," and "not bad" (though "not the best"). So while most mashed potato-meisters would admonish you to stay away from the food processor, if you do like a forkful that sticks to the top of your mouth, peanut butter-style, go for it.

The potatoes mashed by hand had creamy lumps and were rich but not overwhelmingly dense. Food52 tasters said they were the "saltiest, just like they should be" (though no additional salt was added) and many remarked on the "delicious butter flavor" (though, again, no additional butter was added).

While some hand mashers have a squiggly S palm, many experts prefer the tools that look, actually, like primitive ricers: "The best mashers, available from Oxo, Rosle and others," writes Julia Moskin in the New York Times, "are those with a flat face, a grid pattern and crisp edges where the potato meets the masher. These mashers mimic the extrusion effect of a ricer, work just as well and are easier to manage, producing fluffy mountains with a minimum of lumps, butter and physical exertion." 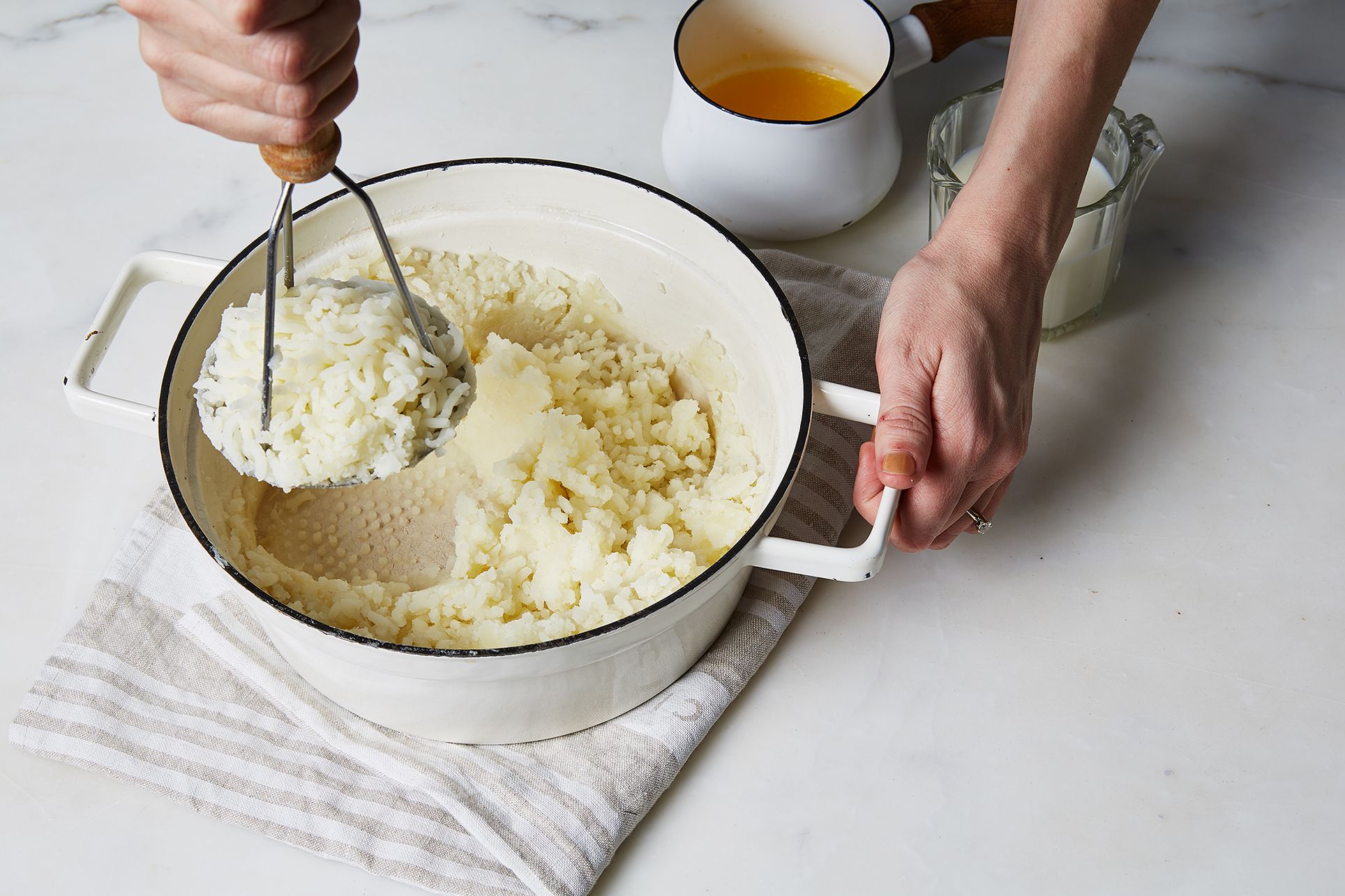 As you work the potatoes with machine force, they go from light-fluffy to dense-creamy. "If you like your mashed potatoes extra-creamy," declares Good Housekeeping, "use your hand or stand mixer instead [of a ricer]. Just watch carefully and stop when the potatoes are silky-textured—before they become gluey."

Electrically-mixed potatoes combine the smoothness of milled potatoes with the denseness of the often-lumpy hand-mashed, but our tasters also called them "bland," "blah," and "meh," with "one vote for the worst." This could be a product of the mixing itself: When more of the starch molecules are left intact, the butter and dairy can coat each individual particle, making the potatoes creamy, and, it seems, allowing a more pronounced butter flavor to come through.

So Which Path Should You Pick?

If you want silky-smoothness, use a food mill or a ricer.

If you want lumpy and light-but-creamy, mash by hand (a ricer-like masher will produce the lightest, least chunky results).

If you want gummy (...are those of you out there?), go with the food processor.

If you want dense, hefty, and uniform, break out an electric mixer.

Do you swear by your food mill for perfect mashed potatoes? Or do you use the back of a wooden spoon? Tell us in the comments!