The Ideological Corruption of Science - WSJ 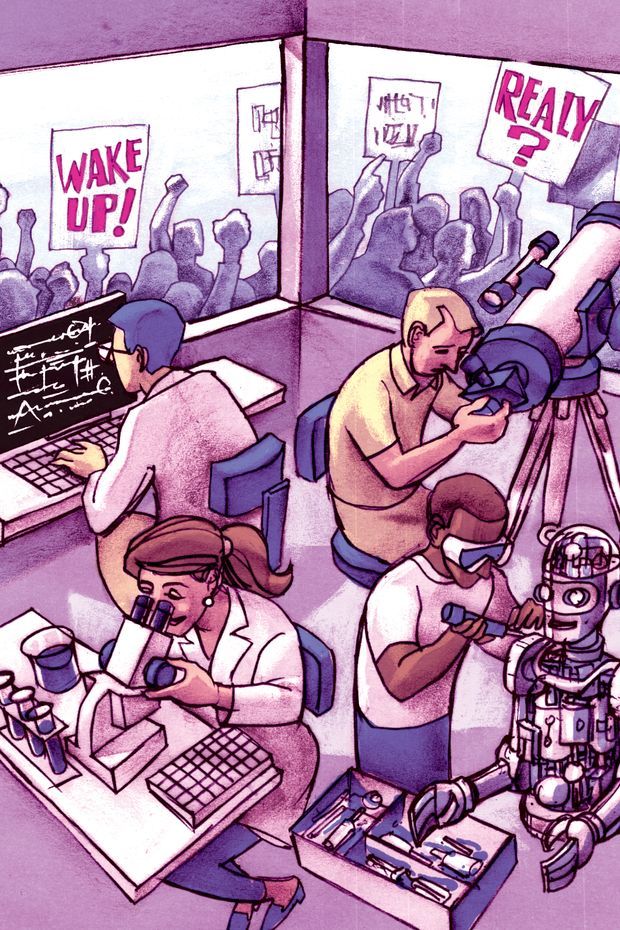 In American laboratories and universities, the spirit of Trofim Lysenko has suddenly been woke.

In the 1980s, when I was a young professor of physics and astronomy at Yale, deconstructionism was in vogue in the English Department. We in the science departments would scoff at the lack of objective intellectual standards in the humanities, epitomized by a movement that argued against the existence of objective truth itself, arguing that all such claims to knowledge were tainted by ideological biases due to race, sex or economic dominance.

It could never happen in the hard sciences, except perhaps under dictatorships, such as the Nazi condemnation of “Jewish” science, or the Stalinist campaign against genetics led by Trofim Lysenko, in which literally thousands of mainstream geneticists were dismissed in the effort to suppress any opposition to the prevailing political view of the state.

Or so we thought. In recent years, and especially since the police killing of George Floyd in Minneapolis, academic science leaders have adopted wholesale the language of dominance and oppression previously restricted to “cultural studies” journals to guide their disciplines, to censor dissenting views, to remove faculty from leadership positions if their research is claimed by opponents to support systemic oppression.

In June, the American Physical Society (APS), which represents 55,000 physicists world-wide, endorsed a “strike for black lives” to “shut down STEM” in academia. It closed its office—not to protest police violence or racism, but to “commit to eradicating systemic racism and discrimination, especially in academia, and science,” stating that “physics is not an exception” to the suffocating effects of racism in American life.

While racism in our society is real, no data were given to support this claim of systemic racism in science, and I have argued elsewhere that there are strong reasons to think that this claim is spurious. The APS wasn’t alone. National laboratories and university science departments joined the one-day strike. The pre-eminent science journal Nature, which disseminates what it views as the most important science stories in a daily newsletter, featured an article titled “Ten simple rules for building an anti-racist lab.”

At Michigan State University, one group used the strike to organize and coordinate a protest campaign against the vice president for research, physicist Stephen Hsu, whose crimes included doing research on computational genomics to study how human genetics might be related to cognitive ability—something that to the protesters smacked of eugenics. He was also accused of supporting psychology research at MSU on the statistics of police shootings that didn’t clearly support claims of racial bias. Within a week, the university president forced Mr. Hsu to resign.

At Princeton on July 4, more than 100 faculty members, including more than 40 in the sciences and engineering, wrote an open letter to the president with proposals to “disrupt the institutional hierarchies perpetuating inequity and harm.” This included the creation of a policing committee that would “oversee the investigation and discipline of racist behaviors, incidents, research, and publication on the part of faculty,” with “racism” to be defined by another faculty committee, and requiring every department, including math, physics, astronomy and other sciences, to establish a senior thesis prize for research that somehow “is actively anti-racist or expands our sense of how race is constructed in our society.”

When scientific and academic leaders give official imprimatur to unverified claims, or issue blanket condemnations of peer-reviewed research or whole fields that may be unpopular, it has ripple effects throughout the field. It can shut down discussion and result in self-censorship.

Shortly after Mr. Hsu resigned, the authors of the psychology study asked the Proceedings of the National Academy of Science to retract their paper—not because of flaws in their statistical analysis, but because of what they called the “misuse” of their article by journalists who argued that it countered the prevailing view that police forces are racist. They later amended the retraction request to claim, conveniently, that it “had nothing to do with political considerations, ‘mob’ pressure, threats to the authors, or distaste for the political views of people citing the work approvingly.” As a cosmologist, I can say that if we retracted all the papers in cosmology that we felt were misrepresented by journalists, there would hardly be any papers left.

Actual censorship is also occurring. A distinguished chemist in Canada argued in favor of merit-based science and against hiring practices that aim at equality of outcome if they result “in discrimination against the most meritorious candidates.” For that he was censured by his university provost, his published review article on research and education in organic synthesis was removed from the journal website, and two editors involved in accepting it were suspended.

An Italian scientist at the international laboratory CERN, home to the Large Hadron Collider, had his scheduled seminar on statistical imbalances between the sexes in physics canceled and his position at the laboratory revoked because he suggested that apparent inequities might not be directly due to sexism. A group of linguistics students initiated a public petition asking that the psychologist Steven Pinker be stripped of his position as a Linguistics Society of America Fellow for such offenses as tweeting a New York Times article they disapproved of.

As ideological encroachment corrupts scientific institutions, one might wonder why more scientists aren’t defending the hard sciences from this intrusion. The answer is that many academics are afraid, and for good reason. They are hesitant to disagree with scientific leadership groups, and they see what has happened to scientists who do. They see how researchers lose funding if they can’t justify how their research programs will explicitly combat claimed systemic racism or sexism, a requirement for scientific proposals now being applied by granting agencies.

Whenever science has been corrupted by falling prey to ideology, scientific progress suffers. This was the case in Nazi Germany, the Soviet Union—and in the U.S. in the 19th century when racist views dominated biology, and during the McCarthy era, when prominent scientists like Robert Oppenheimer were ostracized for their political views. To stem the slide, scientific leaders, scientific societies and senior academic administrators must publicly stand up not only for free speech in science, but for quality, independent of political doctrine and divorced from the demands of political factions.

Mr. Krauss a theoretical physicist, is president of the Origins Project Foundation and author of “The Physics of Climate Change,” forthcoming in January.