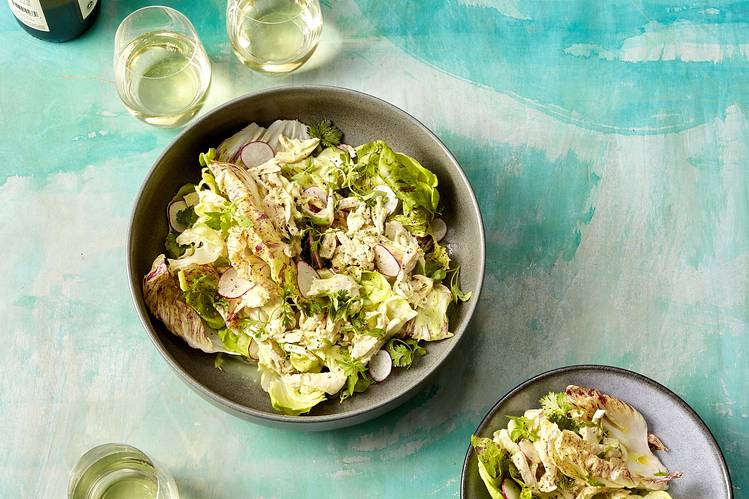 It gets a bad rap from food snobs. Try this recipe for poached chicken in a summery salad and see how wrong they are

EVEN ITS NAME highlights what it lacks. Boneless, skinless chicken breast actually benefitted from its association with austerity in the 1980s and ’90s, when low-fat was the diet trend du jour. But then the foodie faction stormed in, adding “flavorless” and “joyless” to the list of adjectives attached to this cut of chicken. I suspect the naysayers’ greatest beef with boneless, skinless chicken breast is that it’s just too easy—to prepare, to love. Did you overcook it a little? Pull the meat to pieces and fold in some herbs and olive oil or mayo. I promise you a perfectly textured chicken salad. Or use my foolproof cooking method as your starting point. Gently poached at a whispering simmer, this most amenable poultry absorbs flavors from the surrounding liquid, be it a flavorful broth punched up with aromatics or, as in the recipe below, coconut milk brightened with ginger and lemongrass that cooks down to a scrumptious sauce—or, if you chill it, a luscious salad dressing. Skin and bones have their benefits, sure. But sometimes you just don’t need the splatter and the hassle.

This recipe is as versatile as it is simple. The chicken can also be served warm, over rice, scattered with cilantro: Skip the chilling step and spoon the warm sauce over top.

Remove outer layers from a 2-inch piece of lemongrass and crush with a pestle or the flat of a knife. Peel a 2-inch piece of ginger and crush. In a medium saucepan, combine lemongrass and ginger with 1 (13.5-ounce) can coconut milk, ½ cup roughly chopped cilantro, ¼ teaspoon kosher salt and a couple grinds of black pepper. Bring to a boil and add 2 boneless, skinless chicken breasts. Reduce heat, maintaining a bare simmer, and poach chicken, flipping halfway into cooking, until cooked through, about 12 minutes. Remove chicken, reserving poaching liquid in pan, and set aside to cool to room temperature. / Meanwhile, make dressing: Add ¼ teaspoon ground turmeric to poaching liquid and simmer over medium heat until reduced by a quarter, about 5 minutes. Transfer dressing to a bowl and chill in refrigerator at least 30 minutes. When ready to serve, shred cooled chicken and toss with a couple spoonfuls of dressing. Arrange salad greens of your choice in a large bowl and toss in fresh herbs, thinly sliced radishes and enough dressing to lightly coat. Toss in chicken and serve.