Cures for Hearing Loss May Be Found in New Drugs 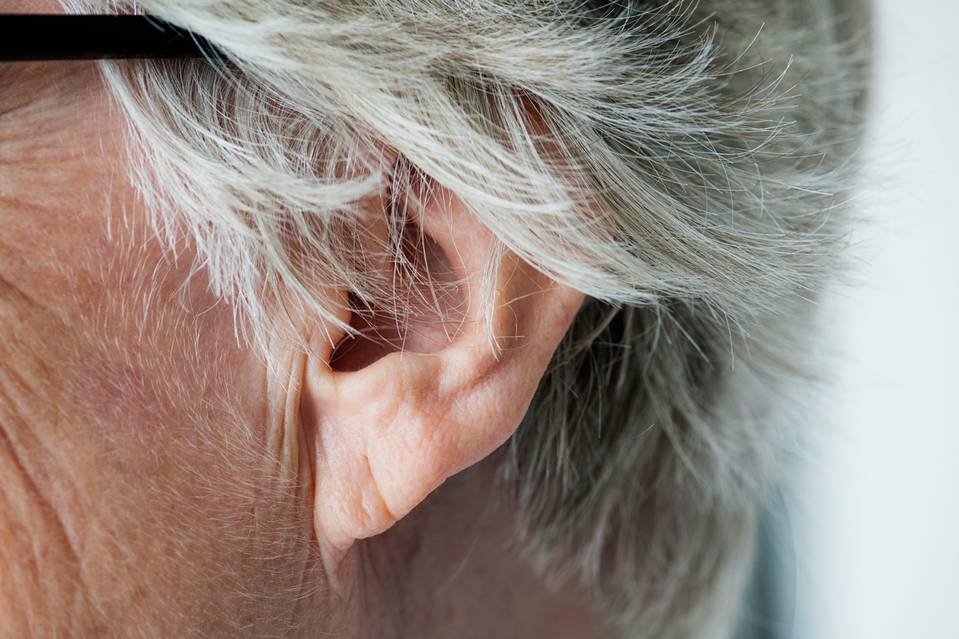 For hearing loss, ‘the potential of drug treatments [is] phenomenal,’ says Frank Lin, a professor at Johns Hopkins.

Scientists are pursuing the first medicines to treat hearing loss.

Today’s principal treatments—hearing aids and electronic devices called cochlear implants—help many people who have suffered damage to their ears caused by aging, noise, genetics or drugs. But neither of those treatments cures or counters the biological causes of hearing loss. By contrast, several experimental new drugs aim to do just that.

Many of these efforts are still in the early stages. But a few drugs and treatments with potential are now in clinical trials, and investigators say that growing understanding of both the genetics of hearing loss and how the ear works have them hopeful of success. The variety of possibilities being worked on by biotechnology companies and academic researchers includes gene therapy and drugs to spur growth of new sensory cells in the ear.

World-wide, 466 million people have disabling hearing loss, including 34 million children, according to the World Health Organization. Children with severe to total hearing loss have lower literacy than their fully hearing peers, and their education is greatly compromised, according to a 2017 paper in the medical journal Lancet.

But hearing loss happens to nearly everyone over time, growing more likely with each decade of life. About 2% of adults aged 45 to 54 have disabling hearing loss, according to the National Institute on Deafness and Other Communication Disorders. That jumps to nearly 25% for people in the 65-to-74 range and 50% for those aged 75 and older.

One way biotech companies seek to cure hearing loss in children is by using a healthy gene to compensate for a defective gene that causes deafness. Researchers have identified some 150 genes that when mutated lead to hearing loss, says Manny Simons, chief executive of Boston-based Akouos Inc.

Akouos is developing a gene therapy for infants whose deafness at birth is caused by faulty versions of a gene called otoferlin. Surgeons will deliver a synthetic virus carrying a normal otoferlin gene into the inner ear. Once there, the virus would infect sensory hair cells, allowing the gene to enter their nuclei. These hair cells, equipped with a functional otoferlin gene, would then be able to transmit the sound vibrations they convert into electrical signals to the brain.

The company hopes a one-time treatment will let children with this rare disorder hear without a cochlear implant. Clinical trials are expected to begin in 2021, says Dr. Simons, adding. “Our hope is we might be able to restore true physiologic hearing that is very close to normal.”

Lawrence Lustig, who is the Howard W. Smith professor and chair of the department of otolaryngology, head and neck surgery at Columbia University Medical Center and New York Presbyterian Hospital, says he sees potential in gene therapies such as the one Akouos is working on to offset the effects of defective genes.

“This has some real promise,” Dr. Lustig says. “If you can take a kid who would otherwise receive a cochlear implant and give them natural hearing, I think you’d see vastly improved hearing outcomes.”

Going to the Source

Among emerging treatments for hearing loss in children is gene therapy for some of the roughly 150 known genes that if mutated can cause it. How this works in the case of a gene called otoferlin: 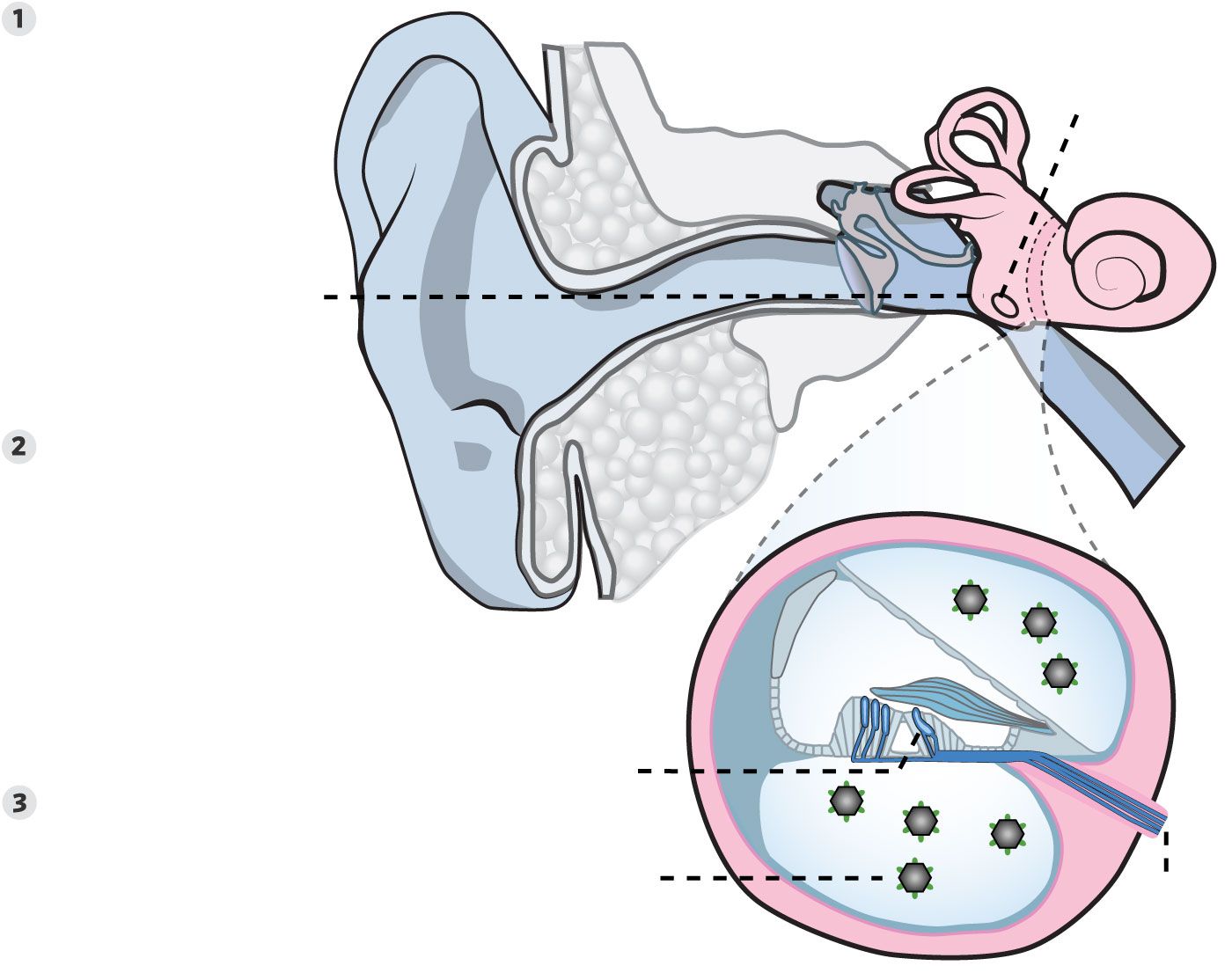 A synthetic virus carrying a healthy copy of the otoferlin gene is injected into an ear structure known as the round window.

The fluid the virus is delivered into comes into contact with sensory hair cells in the inner ear that are required for hearing. The virus infects the hair cells, allowing the healthy gene to enter their nuclei.

Sensory hair cells, equipped with the normal otoferlin gene, can now perform their job of transmitting sound vibrations that they convert into electrical signals to the brain.

For some, hearing damage is a side effect of certain chemotherapy treatments for cancer. After treatment with cisplatin, for example, as many as 80% of adults and at least 50% of children have permanent hearing loss, according to a 2017 study published in Nature Communications.

Boston-based Decibel Therapeutics Inc. is testing a medicine in clinical trials that may prevent cisplatin-induced hearing loss without disrupting cisplatin’s ability to fight cancer. The company’s drug, for injection into the middle ear before cisplatin treatment begins, is designed to prevent cisplatin from killing vital cells in the inner ear. Decibel, which previously tested the drug in healthy volunteers, is launching its first study of the treatment in adults being treated with cisplatin.

“We’re intercepting the invaders before they get into the city,” Decibel CEO Steven Holtzman says.

Decibel is concentrating on adults initially because they develop the most cancers and receive the most cisplatin, says Chief Operating Officer Paula Cobb. After demonstrating efficacy in adults, it will consider technologies and approaches to help it treat children as well, she says.

Kay Chang, a professor of otolaryngology-head and neck surgery at Stanford University School of Medicine, says he thinks that the mechanistic approach of Decibel’s drug is sound. But, Dr. Chang adds, delivering the therapy through an injection into the middle ear of children would be challenging to implement because most would be unable to sit still through the procedure. Children would typically need general anesthesia to get the drug before each cycle of cisplatin therapy, which would be impractical, he says.

For children, “If Decibel Therapeutics could pair up with a company that has a better way of delivering what they have into the inner ear, I think they could do very well,” Dr. Chang says.

Another drug, a liquid form of d-methionine, a micronutrient found in foods such as cheese and yogurt, may protect against noise-induced hearing loss by neutralizing harmful molecules known as free radicals. A recent Phase 3 clinical trial funded by the U.S. Department of Defense sought to determine whether the compound could prevent hearing loss and tinnitus when given before, during and after M16 rifle training.

Kathleen C.M. Campbell, an audiologist and research professor at Southern Illinois University School of Medicine who developed the drug version of d-methionine, says she is preparing the manuscript of the clinical trial for publication and can’t discuss the results right now.

Researchers also aim to restore sensory hair cells in the inner ear that have been damaged or killed.

Birds, fish, reptiles and amphibians spontaneously regenerate hair cells, but not humans, says Robert Jackler, chairman of the department of otolaryngology-head and neck surgery at Stanford University School of Medicine.

He says it is possible that an effective treatment that regenerates hair cells in humans could be developed, though perhaps not quickly. The science will need to progress faster for that to occur, he says.

“I have confidence that it will come, and probably sooner rather than later, but not in the very short term based on what I’m seeing today,” Dr. Jackler says.

Biotech companies are studying a variety of regenerative drugs that they hope will be proved effective in the coming years. U.K.-based startup Rinri Therapeutics Ltd. raised seed venture capital in May to pursue a goal of treating hearing loss that occurs because of damage to sensory nerves of the ear. Its treatment involves transplanting nascent cells into the inner ear called otic neural progenitors. In animal studies, Rinri has shown that these cells, once transplanted, mature into functional ear cells that reverse hearing loss, according to CEO Simon Chandler. Human clinical trials are expected to begin in three to four years, he says.

Frequency Therapeutics Inc. seeks to spark the creation of new hair cells through a treatment designed to activate progenitors in the inner ear. In April, the Woburn, Mass.-based biotech company said it saw improvements in hearing functions in multiple patients treated in an early-stage clinical trial of its drug. Frequency said in late August that it was preparing to launch midstage clinical research of the treatment, but it declined to comment for this article.

Amsterdam-based Audion Therapeutics B.V., meanwhile, is betting on a compound it licensed from Eli Lilly & Co. known as a gamma secretase inhibitor. In animals, drugs in this class have been able to turn on a chemical switch to produce new sensory hair cells from other cells in the inner ear called supporting cells, and improve hearing, according to Audion. The company is testing the medication in midstage clinical studies taking place in Europe.

Anne G.M. Schilder, professor of otolaryngology at the University College London Ear Institute, says she sees promise in Audion’s strategy and significant potential for drug therapies addressing hearing loss in general. Dr. Schilder, who is also director of the translational hearing research program of the National Institute for Health Research Biomedical Research Centre at University College London Hospitals, says she leads the publicly funded Audion clinical trials as a researcher and has no financial relationship with the company.

“If these treatments are effective they’re going to radically change the way we provide hearing care,” Dr. Schilder says.

To be effective, regenerative hair-cell treatments will have to overcome a variety of technical challenges, according to Tatjana Piotrowski, an investigator at the Stowers Institute for Medical Research in Kansas City, Mo., who studies hair-cell regeneration in zebrafish. The cells, for example, would have to be durable, oriented properly and connected to nerves that relay signals to the brain.

“In general, I’m optimistic that we will figure it out,” Dr. Piotrowski says.

Mr. Gormley is a reporter for The Wall Street Journal in Boston. He can be reached at brian.gormley@wsj.com.