If you were an enthusiastic Donald Trump supporter, are you ready to enter a re-education program? 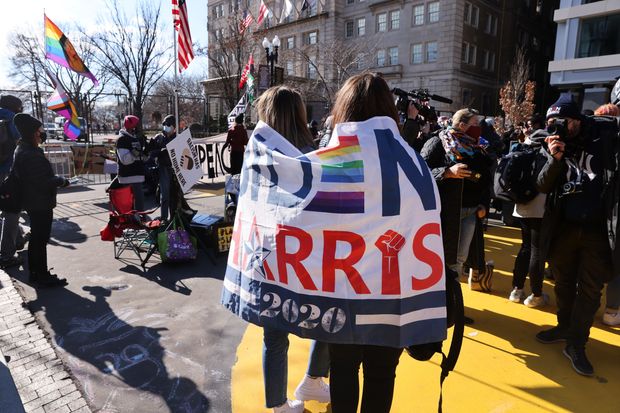 _
Can you feel the unity?

Have you come together to bind the nation’s wounds?

Have you renounced your white privilege? Your unconscious bias probably hasn’t been eradicated in the last week, so it will need attention. But don’t worry. If you work in the federal government, you’ll soon have the opportunity—sorry, obligation—to get that fixed with a series of bias-elimination sessions. If you work for a large company, you’ve probably already watched the videos, so you’ve no excuses for continuing not to recognize that America’s foundational malignity is all your fault.

If you’re a woman, have you shared a restroom with some strapping-looking figure you’re sure used to be a man but now says she’s all female? I hope your high-school daughters are doing their part to unify the country by ceding whatever hope of athletic success they had to the new class of 6-foot-tall girls with bulbous triceps.

In the service of national unity, you should by now have agreed to welcome a new influx of illegal aliens into your community. Better yet, perhaps you’re an immigrant who’s been through the costly, protracted process to become an American citizen and are looking forward to welcoming those who opted to take the less “documented” route.

If you work in fossil fuels—maybe you’re employed on the Keystone XL pipeline—aren’t you grateful that your imminent joblessness is bringing the country together?

If you were an enthusiastic Donald Trump supporter, are you ready to enter a re-education program? You may not realize that your reprogramming is essential to the preservation of democracy, but after attendance at a series of camps led by Alexandria Ocasio-Cortez and a team of journalists from the Washington Post, you’ll once again be able to contribute—civilly—to political discourse.

If you expressed doubt online about the reliability of the presidential election result, your contribution to bringing the nation together might be an interview with a pair of nice federal agents.

As a commentator on a conservative platform, I’m ready to do my part for national harmony by being deplatformed by technology companies the next time I step out of line. But if you’re that rare thing, a conservative in academia, you might want to make sure your barista skills are up to snuff, though you probably won’t be welcome in any of the Starbucks in Cambridge or Ann Arbor—or anywhere else.

After four years of hateful, divisive leadership that stoked raging enmities and fuelled murderous bigotries, I hope you’re feeling the soothing balm of comity as it pours forth from executive orders, presidential declarations and the various ministries of truth that used to be news organizations.

In President Biden’s inaugural address—which in its composition and significance was reminiscent of Lincoln’s second inaugural, Pericles ’ funeral oration and the Sermon on the Mount—he emphasized that the path to national unity lies not only through our acquiescence to the Democrats’ agenda, but in a renewed communal asseveration of the truth.

“There is truth and there are lies. Lies told for profit and for power,” he said. “And each of us has a duty and responsibility . . . to defend the truth and defeat the lies.”

It must have been in that spirit that on day one some administration official told CNN that the Biden team had discovered that their predecessors had left them a nonexistent coronavirus vaccine distribution plan. It was presumably heeding the president’s call to defeat lies that the CNN reporter decided not to challenge the official, given that, with almost 40 million vaccines already distributed, there might have been some plan in place.

Then there was defending the larger truth about Mr. Biden’s plan to get 100 million doses into American arms in 100 days—a million a day. An ambitious goal, his team called it. An ambitious goal, the press repeated, helping to lower the expectations bar for the new president.

Only in the small print did we learn that in the final week of the Trump administration, doses administered were already up to well over 900,000 a day, on a rapidly rising trajectory. Ambitious indeed.

Truth is attested to by actions as well as words. Wearing a mask, Mr. Biden has told us, is essential to saving lives. But on inauguration night, there he was, celebrating, maskless. His press secretary, in a searing moment of truthfulness, told us it was fine because he had “bigger issues” to worry about.

That admission, in its own way, was a clarifying one, capturing as it did the real meaning of our new era of truth and unity: the truth is that our unity will be achieved by your doing what we tell you to do.