BILYI KAMIN, Ukraine — The vast collectives that fed the Soviet Union are now a patchwork of tiny gardens, fields and vacant lots. But combined, they could help feed the world: Russia, Kazakhstan and Ukraine have fertile yet untilled land the size of Idaho.

If someone could just stitch the land back together and create modern farms, agronomists say, the vast spaces north and east of the Black Sea could generate an extra 115 million metric tons of wheat per year — 20% of the world’s current production.

Richard Spinks is trying to do just that. The 41-year-old Briton has literally been going door-to-door, leasing small plots of land from hundreds of thousands of poor farmers in western Ukraine. His company, Landkom International PLC, has planted wheat, barley and rapeseed on a combined 25,000 acres. Landkom expects to reap its first big harvest this fall.

Such efforts could give a much-needed boost to global food supplies. For decades, agribusiness companies relied on new seed and fertilizer varieties to push yields higher. But as technology gains have slowed, the search for additional arable land has intensified. That’s created an opening for entrepreneurs with visions of re-collectivizing the land in former communist countries and rebooting production.

The approach is also being tried in China, where much of the farmland is divided into small plots controlled by village collectives. A handful of farmers are trying to form larger and more efficient farms by cobbling together pieces of land rented from absent neighbors.

In Ukraine, Mr. Spinks faces long odds. Property laws bar private land sales, so companies must sign leases with individual land owners who often pull out before the contract expires. To keep his lessors happy, Mr. Spinks says he invests heavily in local infrastructure, and has built roads, schools and orphanages. This past Easter, TV spots wished viewers a happy holiday from Landkom.

Bilyi Kamin was once among the brightest stars in the Soviet agricultural constellation. Some 500 miles west of Kiev, the village regularly fetched accolades from Moscow for its crop yields. The land here, as in most of Ukraine, is uniquely rich in humus, organic matter that makes soil more fertile. Soviet planners depended on the Ukraine for 40% of their empire’s agricultural output.

After the breakup of the Soviet Union in 1991, governments chopped up the old state farms and distributed plots to their citizens. Lacking capital to invest in the land, the new owners mostly planted small vegetable plots or let their animals graze. Many title deeds were not claimed because their owners were deceased or had emigrated. In all, some 55 million acres of arable land in Russia, Kazakhstan and Ukraine went uncultivated. The region, although still a major grain producer, has continued to suffer from a lack of capital investment ever since.

Despite the election of a pro-Western government in Ukraine in 2004, an influential business and political elite that takes its cues from Moscow remains skeptical of Western investment. In turn, foreign investors find themselves coping with a venal political system and courts that are deeply corrupt. According to a ‚corruption perception index‘ compiled by Berlin-based watchdog Transparency International, international business people consider Ukraine among the most corrupt countries in the world, below Uganda, Moldova and Cuba.

Unused Land: Together, the untilled, arable land of the former Soviet Union could generate 115 million metric tons of wheat per year.

Potential Profits: Landkom has leased 165,000 acres from thousands of landowners in Ukraine and will reap its first big harvest this year.

Critics of the land-leasing model say that when a local farmer breaks a contract there is little legal recourse. Sphere Asset Management, a Kiev-based hedge fund, recently started selling off the leases it holds to 74,000 acres here. ‚We’re regularly in litigation‘ with land owners, says Yevgeniy Khata, Sphere’s managing director.

The central government in Kiev is now considering a law to legalize land sales. That could trigger a massive land rush and rapid price escalation. Landkom’s 15-year leases include a clause that would give it first crack at purchasing land. But whether that would work in practice is unclear.

A native of Kent, England, Mr. Spinks says he joined the Royal Air Force when he was 16 and was sent to the Falkland Islands after Britain’s war with Argentina ended in 1982.

He picked up Russian, Spanish and Polish in the air force. After leaving the military in 1987, he says he bounced around Europe for 14 years, selling advertising for several media and publishing companies. In 2000 he met his current wife, who is Ukrainian. They have three children.

In 2001, Mr. Spinks took a job with British Seafood Group, a U.K. processor and producer. He traveled through Russia, Ukraine and Eastern Europe buying fish. He says it was a hard life. Archangelsk, a Russian port city where he often worked, ‚was so depressing they played disco music from the tops of lamp posts to prevent people from committing suicide,‘ he jokes.

Cashing in on Biofuels

Over a beer in Warsaw in November 2005, Mr. Spinks discussed the biofuels boom with friends. Konrad Nowicki, a young Polish entrepreneur, suggested leasing 250 acres in the Ukraine and growing rapeseed, which is commonly used in Europe to make biodiesel for cars.

Together with a third partner they invested £600,000 (about $1 million at the time) of their own money. Mr. Spinks formed Landkom and began leasing land in western Ukraine in early 2006. He worked 18-hour days, often sleeping in a tent next to his fields.

Mr. Spinks’s quest brought him to the quiet village of Bilyi Kamin in October 2006, where he set up Landkom’s headquarters. The village’s name — Ukrainian for ‚White Stone‘ — comes from the surrounding chalky hills.

The locals were initially skeptical of his land grab. Stalin seized land in the 1930s to build collectives, eventually starving millions of peasants. Hitler literally shipped Ukraine’s coveted soil back to Germany.

One evening, Landkom officials called a meeting of the village’s 300 landowners. ‚We’re here to help you develop,‘ Landkom public relations director Yuri Pelenski, a British son of Ukrainian refugees, recalls telling the crowd. He offered to lease everybody’s land for around $14 an acre a year — a standard price in Ukraine, but less than a tenth the price in the U.K. More attractive, however, was the salary Landkom would pay the farmers to help work the land: $400 a month, or twice the national average base salary for manual labor.

Maria Petryshyn says she wasn’t sure what to do at first. ‚I didn’t want to give up something I worked my whole life for,‘ says Ms. Petryshyn, who in 1973 was given a medal for local sugar beet production. In 1996, she received a 2.5-acre plot from the government as part of a privatization scheme.

In the end, she agreed to Landkom’s offer. ‚I’m an old woman,‘ says the 70-year-old Ms. Petryshyn. ‚I do not have a tractor or combines, and my hands are worn out.‘ Her $35 annual payment from Landkom supplements her $100 monthly pension. Many of Ms. Petryshyn’s neighbors, lured by the promise of working their own land for Landkom for an additional fee, also went along.

Landkom routinely lobbies local officials in an effort to get all landowners in a village to sign leases. The company recently gave its lessors in the town of Zolochiv $22,000 to refurbish an orphanage. It then aired a TV commercial advertising its good will. ‚I didn’t know where the money came from until I saw a Landkom commercial with our orphanage on TV,‘ says Natalya Medvid, one of the six Catholic nuns looking after the kids.

Doing business ‚would be harder for [Mr. Spinks] if he didn’t do these things for us,‘ says Ivan Stefanishin, deputy governor of Lvivksa, the oblast — or province — that includes Bilyi Kamin and Zolochiv. ‚An investor has to be part of his environment, that’s normal.‘

Still, there are holdouts. Andriy Duk, 42, farms 120 acres next to Landkom’s headquarters. He owns two tractors and one combine. ‚People in Ukraine can make it on their own,‘ he says. 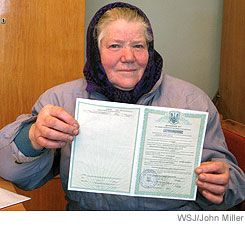 Maria Petryshyn leased her title deed to Landkom International for $35 a year.

Mr. Spinks also faces competition from a handful of multinational companies using a similar model to bet on Ukrainian land. MK Group, a Serbian conglomerate, farms 100,000 acres on leased land around Kiev and is building a complex of silos and storage buildings with an $18 million loan from the European Bank for Reconstruction and Development. Another dozen or so Ukrainian companies are also in the mix.

Last fall, Mr. Spinks set a goal of leasing just under one million acres by 2015. To raise funds, the company sold a 44% stake on the London Stock Exchange in November for $106 million. Since then, the company’s market value has grown to $386 million. Mr. Spinks’s 5.8% stake is worth $22.4 million.

Landkom, which has corporate subsidiaries in Cyprus, the U.K. and Ukraine, says it pays Ukraine’s regular corporate tax rate of 25%. A Ukrainian government spokesman said he couldn’t comment on individual companies.

For now, Landkom can farm only a small percentage of its 165,000 acres because preparing the land and buying equipment is time consuming and costly. This year, Mr. Spinks expects his 25,000-acre harvest to net about $400 per acre, depending on the crop and the yield. Next year, he hopes to harvest four times as much. The biggest American farms rarely exceed 10,000 acres.

Mr. Spinks plans to ship the wheat and rapeseed to processing plants in eastern Ukraine or in Western Europe. He’s currently negotiating contracts with giant commodity traders including Glencore International and Louis Dreyfus. Spokesmen for those companies confirmed they were in talks with Landkom, but said they were waiting to conclude their purchases.

With land and labor so cheap, Landkom figures it can make up for the rising costs of seed, fertilizer and equipment, which has put pressure on farming margins around the world. The price of fertilizer alone has doubled in the past year. Mr. Spinks estimates he will see a 60% profit margin.

He dismisses the notion that his lack of experience in farming will doom his ambitions. ‚It’s just like the fish business, you need to make sure you have professionals who can supply the raw material,‘ he says. He’s hired dozens of professional farmers and agronomists to make key decisions on planting, harvesting and investing in equipment, he says.

Mr. Spinks says the company is investing $250,000 in Bilyi Kamin’s old collective headquarters to put in a modern command center that will guide combines by satellite. It is building a bar room, sauna and gym to lure Western managers, and a fireproof room to store its original leases.

On a recent day, Mr. Spinks toured the fields around Bilyi Kamin in a four-wheel-drive Mitsubishi Pajero. He chain-smoked and barked orders at some of Landkom’s 500 employees into his iPhone. He checked in with villagers and employees.

Vassil Stebnitski, Bilyi Kamin’s chief agronomist under Soviet rule — now a Landkom field manager — showed off a new German-made combine. ‚We need their new technology,‘ said the 54-year-old Mr. Stebnitski. ‚All we had before was land and sky.‘

–Andrew Batson contributed to this article.

On November 14, the Wall Street Journal published a memorable interview with the outspoken Carl Icahn. His comments about CEO's and boards should get drummed into the brain of each shareholder. Most probably his insights are also valid for the CEO's and boards of Swiss companies.…

_And the financial crisis goes on … And the politicians still think they can avoid the painful solution and try to sustain asset prices. But the prices of many assets are bubble prices and these prices need to fall to market levels.…