What Makes This Soup So Good? 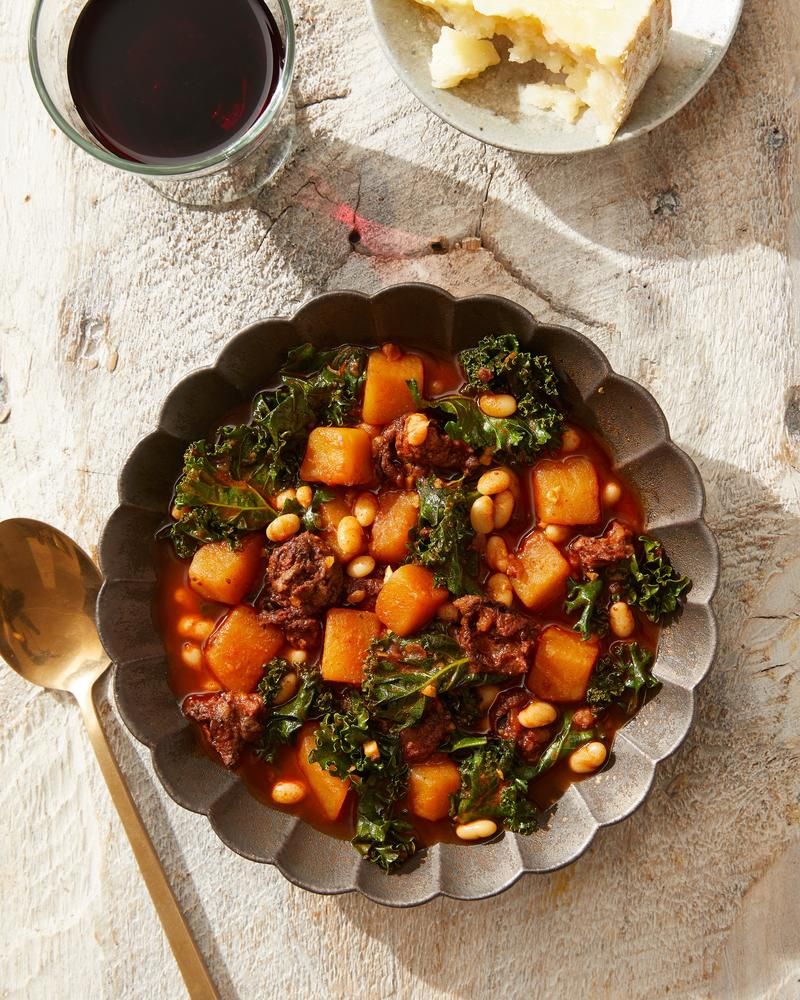 THIS IS JUST LIKE religion to me. That’s how I think about it,” Jim Golden said, sitting on his tin-roofed porch overlooking the Buckhannon River in north-central West Virginia. It was early December and Mr. Golden, a retired restaurateur and firearms salesman, was kicking off an annual early-winter rite: the two-day process of making the Spanish blood sausage morcilla. He tied on a black apron, opened a can of lager and took a sip. Then he began feeding slabs of lily-white pork fat through a 1970s-era Cuisinart grinder.

His recipe, scribbled in red ink and pinned to his refrigerator with a “Proud to be Spanish” magnet, remains mostly true to the one that crossed the Atlantic with his grandparents over a century ago. They were among a wave of families that arrived in this part of West Virginia from Spain’s Asturias region in the early 20th century. Settled near zinc-smelting plants around Clarksburg, Anmoore and Spelter, they routinely made old-world sausages as a community, curing them in backyard smokehouses.

“I never thought about not doing it, because you just grow up with it,” said Mr. Golden. But in recent decades, as West Virginia’s population has declined overall and many of the descendants of those Spanish families have left the Mountain State, protecting that culinary heritage has become a priority. Now in his 70s, Mr. Golden has assumed the role of mentor to preserve both the process of making morcilla and the symbolism in each smoky link. He doesn’t sell the sausages he makes; this is a product meant to be shared with family, neighbors and friends.

His nephew John Pierson stood beside him controlling the grinder’s power switch as they turned rigid blocks of pork fat into coarsely ground morsels that piled up in a big steel pan. “It gives me gratification in my heart and mind and soul to know there’s somebody else who cares about it, and they’re going to pass it on,” Mr. Golden said. As they worked the two men traded stories about other sausage makers in the family, including Mr. Golden’s grandmother, Effegiña Alonso, and his great-aunt, whom he calls Tía Maria.

Dark burgundy in color, bold and complex in flavor, morcilla is used by the family almost exclusively in soups and stews, most notably a hearty kale soup with white beans, potatoes and a generous hit of paprika. “It’s the quintessential wintertime food,” Mr. Pierson said of the dish, which he grew up eating with thick-crusted white bread.

Morcilla gets its delicate texture and much of its flavor from its main ingredient: freshly harvested beef or pork blood. Unlike the pork shoulders and haunches used to make chorizo or longaniza, fresh blood can’t be procured on a whim at a grocery-store meat counter; morcilla production must be carefully coordinated with nearby farmers.

This time, the task of procuring the blood fell to Mr. Pierson. He headed to the mountaintop farm of Seth Lucas, a young homesteader who had prepared a yearling bull for field slaughter. A compassionate farmer who adheres to a waste-free ethos, Mr. Lucas talked about the honor of contributing “the very substance that gives the animal life” to a tradition so important to Mr. Pierson’s family and the area’s Spanish-American community. The farmer felled the bull with a clean headshot from his .22 caliber rifle and quickly severed the animal’s jugular. Holding a wooden spoon and a bright-blue collection bucket, Mr. Pierson knelt beside the bull and stirred rapidly as a gush of deep crimson swirled into the vessel.

Later that day on Mr. Golden’s porch, the nearly two gallons of blood Mr. Pierson collected were combined with the ground pork fat, 50 pounds of chopped onions, coarse salt, spices and fresh parsley, then hand-stuffed into natural casings and tied off into short links. Boiled until firm and chilled overnight, the sausages went into the smoker the next morning.

Mr. Golden insisted there are no hard rules for cooking rustic food like the kale and morcilla soup his family has adapted over the years. With a traditional recipe in hand, cooks “tweak it to their own taste,” he said. Ingredients like crisp apples, turnips, potatoes and hearty greens can swap in and out depending on what’s in the garden or root cellar. But in the soups of Spanish origin found in this part of Appalachia, sausage is the cornerstone.

Home cooks who don’t happen to know a sausage maker can find morcilla at local butchers, at many supermarkets or from online sources such as La Tienda (tienda.com). If you haven’t cooked with this sausage before, you’ll be surprised what a long simmer in broth will do. The morcilla is a real workhorse ingredient, partially melting into the pot as it cooks, releasing smoke and spice as it lends body to a soup or stew.

Still, spending time with the people who make this food, you get stories and layers of meaning no trip to the store can match. At the end of the process, Mr. Pierson lifted wooden dowels draped with finished sausages out of the primitive smoker and looked to his uncle for approval. “They’re beautiful,” Mr. Golden said. “I’m happy with this mess. I really am.” 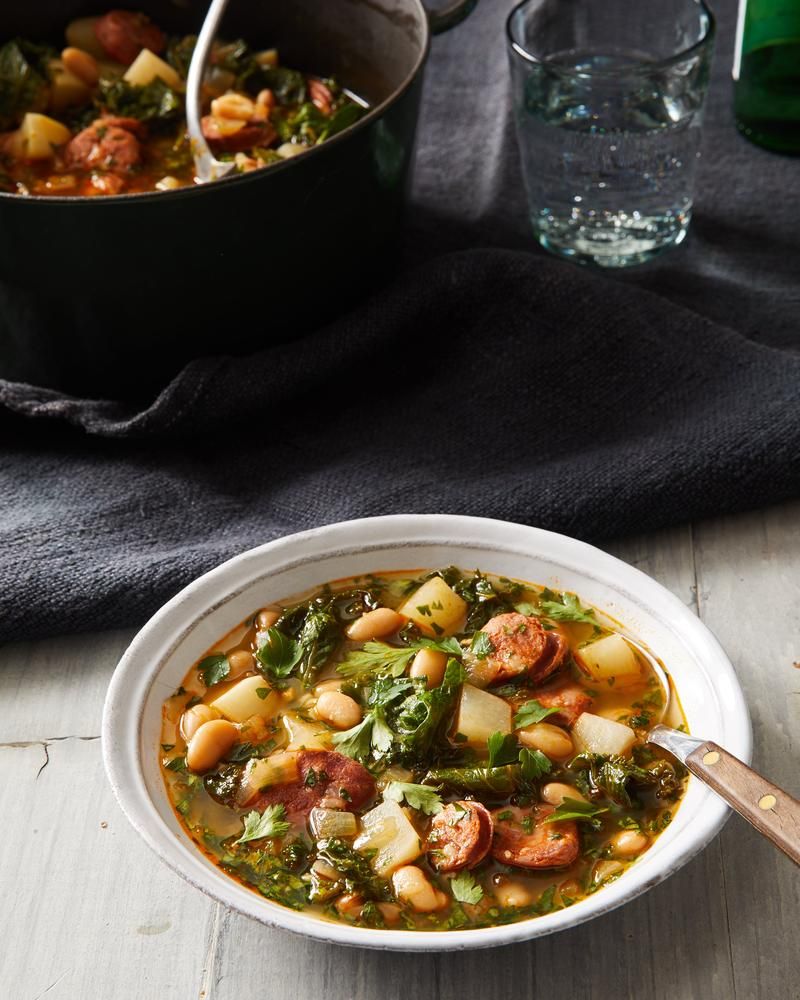 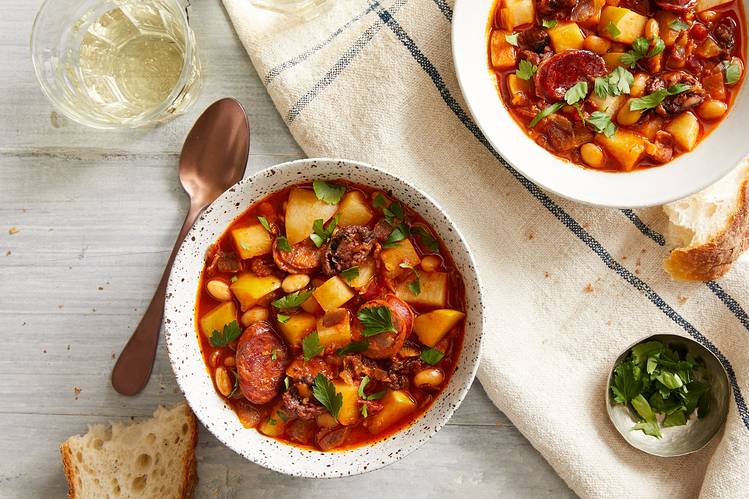 3 cups cooked white beans such as great northern or cannelini