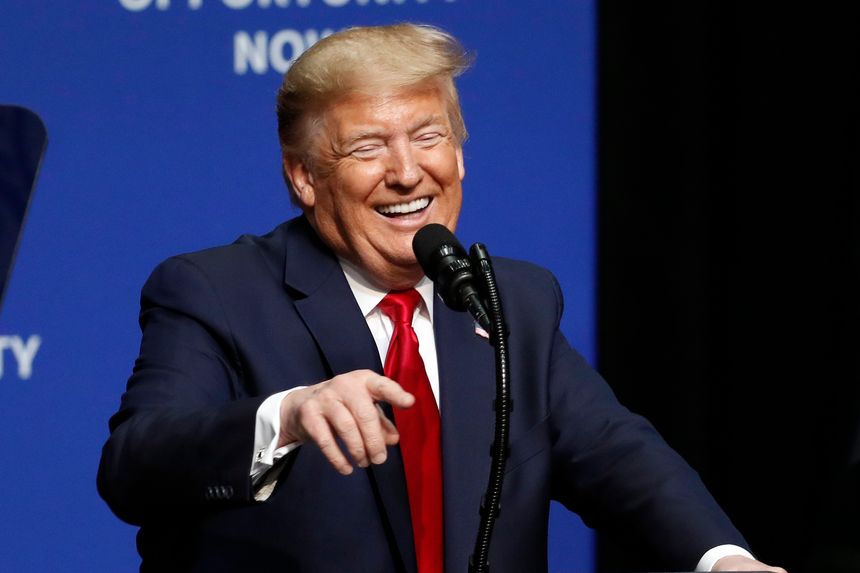 His wild persona is a device that baits enemies and clears space for his agenda.

Is he a disease or a cure? Like him or hate him, there’s tons of spilled ink trying to assess President Trump’s governing style. To me, the key to understanding Trumpism is remembering why he was elected.

Those reforms have left the market free to do its magic and got the economy grooving like it’s 1999. The daily Trump hurricane—like the commotion over the Chiefs from Kansas—makes the media focus on the all-powerful wizard while ignoring the policy makers behind the curtain.

Alfred Hitchcock called this kind of distraction a “MacGuffin”—something that moves the plot along and provides motivation for the characters, but is itself unimportant, insignificant or irrelevant. It can be a kind of sleight of hand, a distraction, and Mr. Trump uses his own public persona as a MacGuffin in precisely that way. The mobs decked in “Resist” jewelry fall for it every time.

For example, Sen. Bernie Sanders used his remarks during the Senate impeachment trial to point out that the media had documented some 16,200 alleged lies by President Trump. The MacGuffin worked! Mr. Sanders and his peers are focused on the president’s words, while most voters see the real plot unfolding in America—millions of jobs and rising wages.

The president’s success comes from his ability to shrug off critics. My son went to college in the early days of the social justice power grab. He recalls heated discussions in which someone would interrupt him to say, “Sorry, but you don’t get a say—you have white privilege.” My son would shoot right back: “Yeah, I don’t believe in that,” and resume his argument. That’s what Mr. Trump does. Rather than cower at the criticism he faces from the mobs, he probably smirks and thinks to himself, “Yeah, I don’t believe in that” and tweets away.

That’s the only reaction that can withstand today’s far left, which has become increasingly self-righteous. The very word “woke” asserts a kind of rebornness—as if those on their side have awakened and become holier than thou. It’s religion on the cheap. The movement takes “diversity” to mean people who see the world exactly as they do, only with different surface characteristics: race, class and gender identity. There’s no room for diversity of expression, let alone diversity of thought. (I’ve confirmed this at Silicon Valley cocktail parties.)

Mr. Trump was elected as an antibody against this swampy disease. He’s the antidote to the snake bite of correctness. He’s a white (privileged?) blood cell fighting the coronavirus of the culture.

I spent the 1980s in New York and got familiar with his annoyingness before much of the country did. But I’ve learned to appreciate Mr. Trump’s theater of chaos and Hitchcockian plot device, which help him get things done. Like what? Well, he’s moved the Israeli embassy to Jerusalem, installed competent originalist Supreme Court justices who don’t see penumbras and emanations whenever they want, sent Iranian Maj. Gen. Qasem Soleimani to the terrorist netherworld, and don’t forget that he got those UCLA basketball players out of Chinese prison. I’m still waiting on a real free-trade agreement.

To say the least, full freedom of expression has yet to be restored. But the engines of progress are running high and are set to continue—no matter how many speeches Nancy Pelosi tears up.

The president’s staff behind the curtain have engineered boom times, despite grounded Boeing 737s and the self-inflicted harm of tariffs. A deregulatory bonanza and corporate tax cuts have unleashed the economic beast. Unemployment is hitting 50-year lows and record lows for minority groups. The Dow Jones and Nasdaq are near record highs. Do you even know what’s happening at the Education, Energy, Agriculture or Commerce Departments? Me neither, but every so often one hears snippets of the reforms taking place behind the flashpots of Trumpiness.

President Trump’s potential opponents running in the Democratic primaries claim he is the disease and they are the cure. They’re missing the ways his MacGuffin game plan is working. The socialist wing wants to raise taxes and give stuff away, which would derail the economy and whack the 96.4% of labor-market participants who already have jobs. Tough sledding. As Yogi Berra might say, this election “ain’t over ’til it’s over.” But as long as the economy hums along—coronavirus notwithstanding—there’s a good chance voters will give the antibody more time to cure the country’s actual disease.