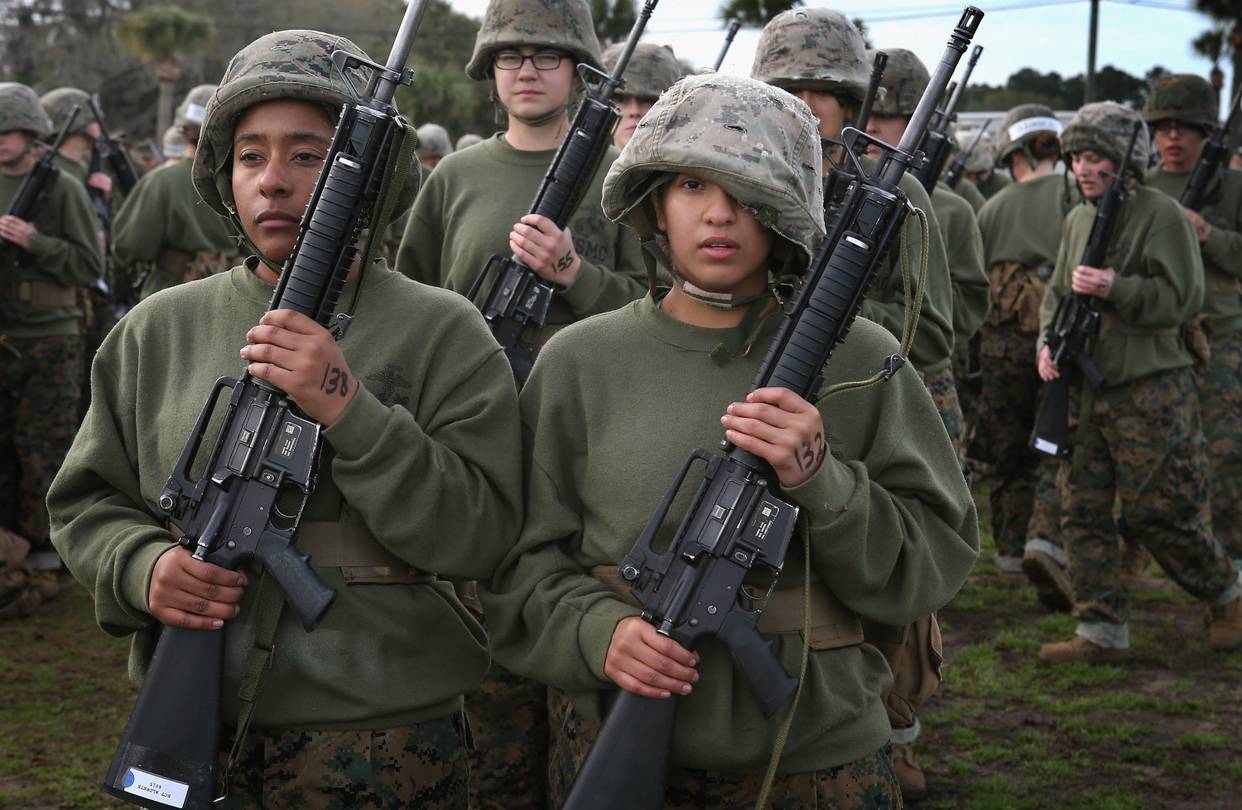 The military is watering down fitness standards because most female recruits can’t meet them.

The Obama-era policy of integrating women into ground combat units is a misguided social experiment that threatens military readiness and wastes resources in the service of a political agenda. The next defense secretary should end it.

In September 2015 the Marine Corps released a study comparing the performance of gender-integrated and male-only infantry units in simulated combat. The all-male teams greatly outperformed the integrated teams, whether on shooting, surmounting obstacles or evacuating casualties. Female Marines were injured at more than six times the rate of men during preliminary training—unsurprising, since men’s higher testosterone levels produce stronger bones and muscles. Even the fittest women (which the study participants were) must work at maximal physical capacity when carrying a 100-pound pack or repeatedly loading heavy shells into a cannon.

Ignoring the Marine study, then-Defense Secretary Ash Carter opened all combat roles to women in December 2015. Rather than requiring new female combat recruits to meet the same physical standards as men, the military began crafting “gender neutral” standards in the hope that more women would qualify. Previously, women had been admitted to noncombat specialties under lower strength and endurance requirements.

Only two women have passed the Marine Corps’s fabled infantry-officer training course out of the three dozen who have tried. Most wash out in the combat endurance test, administered on day one. Participants hike miles while carrying combat loads of 80 pounds or more, climb 20-foot ropes multiple times, and scale an 8-foot barrier. The purpose of the test is to ensure that officers can hump their own equipment and still arrive at a battleground mentally and physically capable of leading troops. Most female aspirants couldn’t pass the test, so the Marines changed it from a pass/fail requirement to an unscored exercise with no bearing on the candidate’s ultimate evaluation. The weapons-company hike during the IOC is now “gender neutral,” meaning that officers can hand their pack to a buddy if they get tired, rather than carrying it for the course’s full 10 miles.

Lowering these physical requirements risks reducing the American military’s lethality. A more serious effect of sex integration has become taboo to mention: the inevitable introduction of eros into combat units. Putting young, hormonally charged men and women into stressful close quarters for extended periods guarantees sexual liaisons, rivalries and breakups, all of which undermine the bonding essential to a unified fighting force.

A Marine commander who served in Afghanistan described to me how the arrival of an all-female team tasked with reaching out to local women affected discipline on his forward operating base. Until that point, rigorous discipline had been the norm. But when four women—three service members and a translator—arrived, the post’s atmosphere changed overnight from a “stern, businesslike place to that of an eighth-grade dance.” The officer walked into a common room one day to find the women clustered in the center. They were surrounded by eager male Marines, one of whom was doing a handstand.

Another Marine officer, who was stationed on a Navy ship after 9/11, told me that a female officer had regular trysts with an enlisted sailor in the engine room. Marine Cpl. Remedios Cruz, one of the first women to join the infantry, was discharged late last year after admitting to a sexual relationship with a male subordinate. Army Sgt. First Class Chase Usher was relieved of his leadership position for a consensual relationship with a female soldier that began almost immediately after she arrived at his newly gender-integrated unit in Fort Bragg, N.C.

Long before infantry integration became a feminist imperative, evidence was clear that a coed military was a sexually active one. In 1988 then-Navy Secretary Jim Webb reported that of the unmarried enlisted Navy and Air Force women stationed in Iceland, half were pregnant.

President Trump’s first defense secretary, Jim Mattis, had seemed a good candidate for reversing the integration of women in combat units. A former Marine commandant, Mr. Mattis had previously addressed the incompatibility of eros and military discipline. New York Sen. Kirsten Gillibrand challenged him about these politically incorrect views during his confirmation hearings, but he left enough wiggle room to preserve his options.

Unfortunately, Mr. Trump chose to ban transgender people from serving in the military rather than tackling gender integration. Mr. Trump cited the cost to taxpayers of sex-reassignment surgery for soldiers, but those costs are minute compared with the future medical bills for women’s combat-battered bodies. And women pose a far greater challenge to combat-unit cohesion than do transgender troops, because of their numbers and the nature of sexual attraction.

The argument for putting women into combat roles has always been nonmilitary: Combat experience qualifies soldiers for high-ranking Pentagon jobs. But war isn’t about promoting equality. Its objective is to break the enemy’s will through precise lethal engagement, with the lowest possible loss of American life. The claim that female combat soldiers will perform as lethally as men over an extended deployment entails a denial of biological reality as great as the one underlying the transgender crusade.

Female engineers and others did return fire when attacked in Iraq and Afghanistan. But performing well in incident-related combat is a far cry from serving in a dedicated ground-combat unit, with its months of punishing physical demands.

The incoming Pentagon chief can expect an aggressive grilling on gender integration from the Senate Armed Services Committee. He should promise to resolve the claim that, when it comes to combat, there are no significant physical differences between men and women. He could do it by pitting an all-female infantry unit against an all-male unit and seeing how they measure up.

Ms. Mac Donald is a fellow at the Manhattan Institute and author of “The Diversity Delusion: How Race and Gender Pandering Corrupt the University and Undermine Our Culture.”