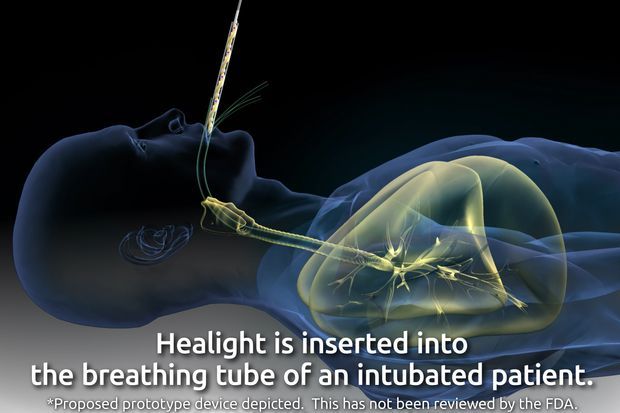 A frame from Aytu BioScience’s video about its potential Covid-19 treatment.

I ran an obscure pharmaceutical company until a few days ago. Then we got famous. Early in the Covid-19 pandemic, Aytu BioScience made a commitment to find ways to help. One of those ways came through our newly formed relationship with a prominent Los Angeles hospital.

On April 20 we put out a press release titled “Aytu BioScience Signs Exclusive Global License with Cedars-Sinai for Potential Coronavirus Treatment.” The treatment is called Healight, and it was developed by research physicians at the hospital’s Medically Associated Science and Technology Program. The technology, which has been in development since 2016, uses ultraviolet light as an antimicrobial and is a promising potential treatment for Covid-19.

Aytu and Cedars-Sinai have engaged with the Food and Drug Administration to pursue a rapid path to human use through an Emergency Use Authorization. But hardly anyone noticed—until Thursday, when President Trump mused, “. . . supposing you brought the light inside the body . . .”

My team and I knew the president’s comments could trigger a backlash against the idea of UV light as a treatment, which might hinder our ability to get the word out. We decided to create a YouTube account, upload a video animation we had created, and tweet it out. It received some 50,000 views in 24 hours.

Then YouTube took it down. So did Vimeo. Twitter suspended our account. The narrative changed from whether UV light can be used to treat Covid-19 to “Aytu is being censored.”

These days, politics seems to dictate that if one party says, “The sky is blue,” the other party is obligated to reply, “No, it’s not, and you’re a terrible human being for thinking that.” That leaves no room for science, in which the data speak for themselves, regardless of ideology, and only when they’re ready. Unfortunately, the visceral excitement of political conflict draws far more clicks and better ratings than the methodical world of science.

Technologies like Healight, which if borne out through clinical studies may represent a viable way to kill coronaviruses, aren’t provided the clear-headed consideration they deserve but are instead flushed into the political mosh-pit of “us vs. them.”

Twitter, YouTube and Vimeo are under enormous pressure from political activists. They also need to ensure that information on their platforms is safe and accurate. That’s exactly why Aytu decided to post videos and tweet about Healight.

We at Aytu BioScience are confident that treatments for Covid-19 will be found. We hope we can help. But above all we hope science will ultimately speak louder than politics.

There is still much work to do on Healight—much to study, and much to verify. But I can assure you that, should the FDA approve this technology to treat Covid-19 or other infections, no physician will check a patient’s party affiliation before beginning treatment.