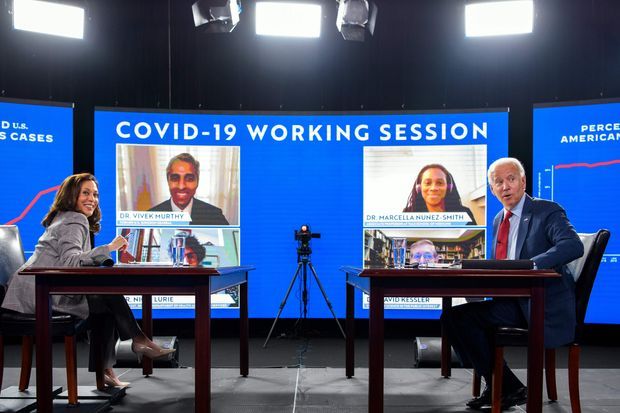 Contrary to what Joe Biden says now, he and his team badly misjudged Covid-19.

Last week’s Democratic convention sought to make four points: Joe Biden is a decent man, Donald Trump is horrible, the president bungled the pandemic and Mr. Biden would have handled it better because he grasped the threat from the start.

Whatever you think of the first three, the last is a fabrication. But the former vice president likes to say it anyway. In June he claimed President Trump “did not listen to guys like me back in January saying we have a problem, a pandemic is on the way.” In May Mr. Biden said, “If he had listened to me and others and acted just one week earlier to deal with this virus, there’d be 36,000 fewer people dead.” The early comments of Mr. Biden and his advisers, however, show little evidence he was on top of anything.

Take Mr. Biden’s first statement on the pandemic. In a 773-word op-ed on Jan. 27, he spent 292 words defending the handling of the 2014 Ebola outbreak in Africa, 268 decrying Mr. Trump’s leadership style and 74 suggesting America faced “the possibility of a pandemic.” He devoted only 140 words to what he would do about it: ask Congress in 2021 to beef up the Public Health Emergency Fund, amend existing law to allow presidents to declare pandemic emergencies, and fully fund the Global Health Security Agenda. Mr. Biden also said he’d renew funding this past spring for hospitals that “treat people with infectious diseases,” a program Congress always reauthorizes.

Even the Washington Post later described the Biden op-ed as “more of an attack on President Trump . . . than a detailed plan of action.”

All the day's Opinion headlines.

On Jan. 31, the day the president issued a China travel ban, Mr. Biden decried Mr. Trump’s “hysterical xenophobia and fear-mongering.” The Biden campaign now says he wasn’t referring to the ban, but it sounds like he was. Campaigning the next day, Mr. Biden seemed to attack the ban again, saying, “Disease has no borders.”

It wasn’t only Mr. Biden; it was also the people around him. Ron Klain, a longtime top adviser and former Biden chief of staff, opposed a travel ban on Jan. 28, a few days before it was announced, calling it “premature.” Other Biden advisers were also dismissive. On Jan. 30, Biden confidant and coronavirus adviser Zeke Emanuel told CNBC viewers to “take a very big breath, slow down, and stop panicking and being hysterical.” The virus will “go down as spring comes up.”

Throughout February, Mr. Biden’s lieutenants kept minimizing the threat. In a Feb. 6 op-ed, Biden coronavirus adviser Irwin Redlener wrote that a global pandemic was “not very likely” and predicted the chances of “getting a severe, potentially lethal form of the Wuhan virus is negligible.” On Feb. 11 Mr. Klain again played down the likelihood that Covid would become “a serious epidemic.” “The evidence suggests it’s probably not that,” he said. Two days later, Mr. Klain tweeted, “We don’t have a COVID-19 epidemic in the US but we are starting to see a fear epidemic.”

Suggesting in a Feb. 20 interview that there’d been “an overreaction,” Dr. Emanuel again suggested “warm weather is going to come and, just like with the flu, the coronavirus is going to go down.” Then on Feb. 24 House Speaker Nancy Pelosi urged tourists in San Francisco to “come to Chinatown.” Mr. Klain echoed her three days later, saying people should not be dissuaded by “needless fears about coronavirus.” He added that everyone “should tonight go down to Chinatown in their city and buy dinner or go shopping.”

On Feb. 29, with news of the first U.S. coronavirus death, Dr. Emanuel told CNN’s Wolf Blitzer that “running out and getting a mask is not going to help.” Then on March 12, coronavirus adviser Lisa Monaco and Mr. Biden double-teamed Mr. Trump’s Europe travel ban: She went on CNN and played down its importance while he tweeted, “A wall will not stop the coronavirus.” Mr. Biden also kept holding large rallies until March 9 and talked up in-person voting as late as April 2.

As the pandemic came on, there was no mention of masks, social distancing or lockdowns from Mr. Biden—and until mid-March, no calls for more protective gear, faster vaccine development or using the Defense Production Act.

Mr. Biden can fault the Trump administration for how it dealt with a once-in-a-century pandemic. But he can’t pretend he was right when he was wrong, that he knew better when he didn’t, that his and his team’s advice was good when it wasn’t. Mr. Biden is politically vulnerable on Covid-19. The president should prosecute that case.

Mr. Rove helped organize the political-action committee American Crossroads and is author of “The Triumph of William McKinley” (Simon & Schuster, 2015).