The report refers 19 times to Crossfire Hurricane’s threat to ‘constitutionally protected activity,’ including the First Amendment. 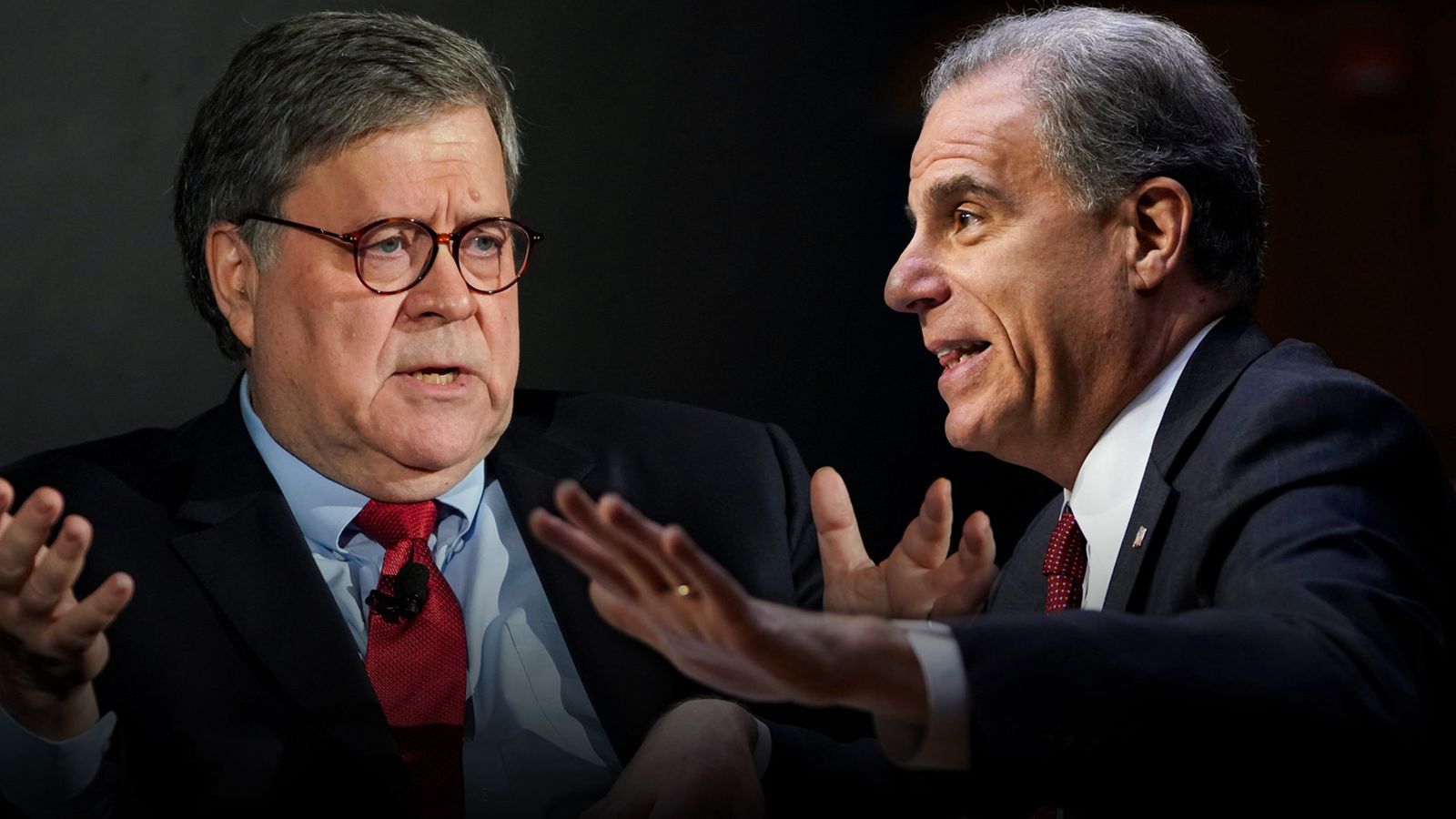 Wonder Land: Speaking at the WSJ CEO Council on Dec. 10, 2019, Attorney General Bill Barr discussed Michael Horowitz’s report on alleged abuses of the Foreign Intelligence Surveillance Act. Images: Getty Composite: Mark Kelly
The battles between President Trump, the Democrats and the media have begun to dispirit a populace that thinks the Trump Wars have little to do with them or the country’s real needs. The public is right—but the war won’t stop.
This week, on the edge of Mr. Trump’s fourth year in office, House Democrats filed articles of impeachment, and we got the Justice Department Inspector General Michael Horowitz’s report on Crossfire Hurricane, an FBI investigation of the Trump presidential campaign that began in July 2016. The Horowitz report matters more, by a mile.
Within minutes of the 434-page report’s release Monday, the generic media headline was that it "debunks" the idea that the FBI was guilty of political bias against Mr. Trump, as well as conservative "conspiracy theories" that there was a deep-state effort to get Mr. Trump.
Before considering what the report says, let us ask: What exactly would describe what was going on in this country’s political life during the more than two years from Mr. Trump’s inauguration through completion of the Mueller investigation? Hard to believe, but Donald Trump himself didn’t create the long Russia collusion narrative, notwithstanding his obeisances to Vladimir Putin during and after the presidential campaign. Dictator fawning is nauseating, but not impeachable.
Thousands of news stories appeared through this period suggesting myriad, concrete Trump campaign linkages to Russia. It is more than a little insulting to the intelligence of the average person to straight-facedly write now that this massive media output based on Beltway leaks was not for a moment about trying to damage the Trump presidency. But let us agree: If something is running off the front pages virtually every day of the week, it’s not a conspiracy.
Whatever the Horowitz review of four FBI Foreign Intelligence Surveillance Act applications and its Crossfire Hurricane investigation did or did not "debunk," the report is mind-boggling, shocking and damning. It is page after page—indeed, paragraph after paragraph—detailing gross errors of judgment and violations of FBI investigation protocols. Everyone who purports to have an opinion about what has been going on in the U.S. the past 3½ years should at least read the report’s detailed executive summary and draw their own conclusions.
One example, regarding the FBI’s applications to the FISA court. The report notes that besides the seven significant errors in the first October 2016 application, the three renewals in 2017 had "10 additional significant errors," including this: "that (1) Steele’s reporting was going to Clinton’s presidential campaign and others, (2) Simpson was paying Steele to discuss his reporting with the media, and (3) Steele was ‘desperate that Donald Trump not get elected and was passionate about him not being U.S. president.’ "
Christopher Steele’s primary FBI handler even told the Horowitz investigators "it was obvious to him"—as early as July 2016—that the producer of the famous anti-Trump dossiers "was politically motivated."
True, Mr. Horowitz asserted no "documentary or testimonial evidence" of anti-Trump bias inside the borders of this investigation. But one has to be obtuse to read this report and not see its authors are incredulous at the idea that the only explanation possible is incompetence and misjudgment on an unimaginable scale by trained FBI professionals. As Mr. Horowitz puts it with almost bemused understatement, "We did not receive satisfactory explanations for the errors or problems we identified."
As it did with the Mueller report, the media is abandoning the actual content to push the public’s attention toward Attorney General William Barr’s "disagreements" with Mr. Horowitz. This is a sham issue, a red herring.
From reading this report, it is clear that what has had the attorney general in a seething white heat has little to do with defending Donald J. Trump and a lot to do with protecting John Q. Public.
The abuses identified in the Horowitz report—by the Crossfire Hurricane team and others at FBI headquarters—are a potential threat to the civil liberties of any American who becomes a target. In a better world than we’ve got now, the press—or some of it—would step back from the Trump-Barr obsessions and revisit its historic role of protecting individual freedoms from such raw, unaccountable government power. The Horowitz report contains at least 19 references to the status quo’s threat to "constitutionally protected activity," notably the "First Amendment."
The report has several references to the Justice Department’s "low threshold" for commencing inquiries. Surely that low threshold was intended to give agents the room to get to the bottom of important investigations. This report makes clear that under its recent leadership, the bureau lost the ability to exercise prudential judgment or prosecutorial discretion. The consequence going forward is likely to be an even more bureaucratized FBI.
What we’ve had for more than three years is the Washington establishment gone wild. For that, the country will pay a high price for very long time.
Write henninger@wsj.com.
Copyright ©2019 Dow Jones & Company, Inc. All Rights Reserved. 87990cbe856818d5eddac44c7b1cdeb8
Measure
Measure
Politics, U S A