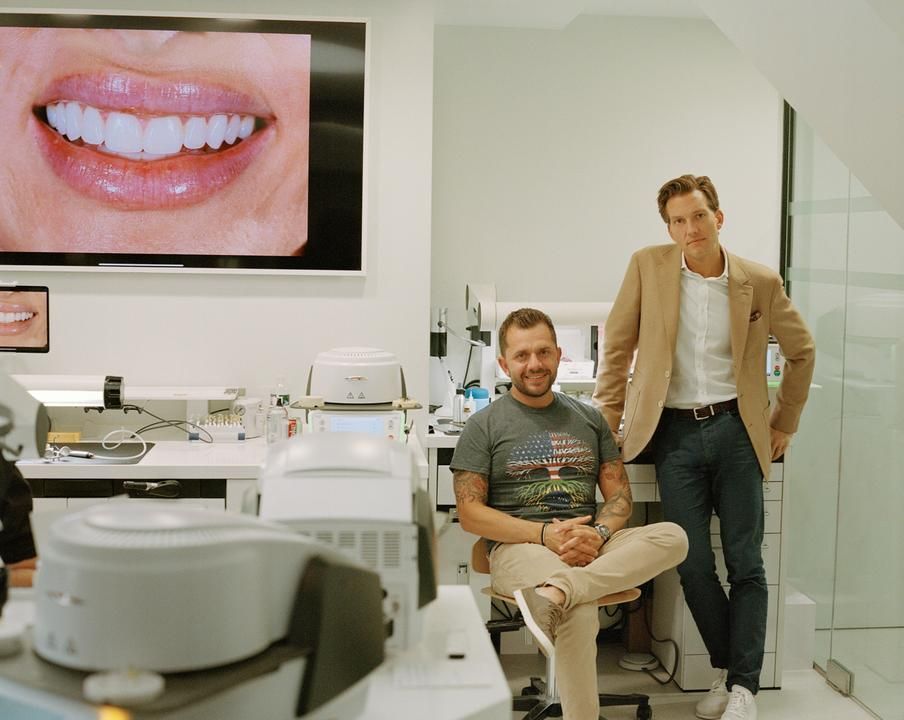 Murilo Calgaro and Michael Apa Photo: Lea Winkler
By Jolie Kerr, Sept. 26, 2019 9:34 am ET
When the elevator opens into the New York office of Apa Rosenthal, there’s a brief, "Am I in the right place?" moment. Machinery whirls in an enclosed glass laboratory-cum-artists’ studio, loud rock music plays, and employees who seem to be dressed more for dinner at Le Bilboquet than for a day at work move about the bright white space. But then, Ahh, or perhaps, Eww. The eye is drawn to an iPad, on which a photo of a rather gruesome-looking set of teeth is displayed, and it’s clear that, yes, this is a dentist’s office. It is sleek, with pale gray marble flooring and white furniture backlit by purple lighting. This office gleams like a perfect smile.
The men behind it are Dr. Michael Apa, 42, and ceramicist Murilo Calgaro, 38. Apa— Mike, as he often calls himself, with a dash of aw-shucks humility, though almost everyone else calls him Apa—is boyish, with slightly graying hair and a big smile that borders on goofy, while Murilo is more bad boy, with bulging biceps and bold tattoos and tight black tees that expose a rakish tuft of chest hair. These are not your typical dentists.
"Have you ever felt cashmere from Loro Piana versus a cashmere sweater?" Apa says. "I want [my] patients to have Loro Piana cashmere in their mouth." 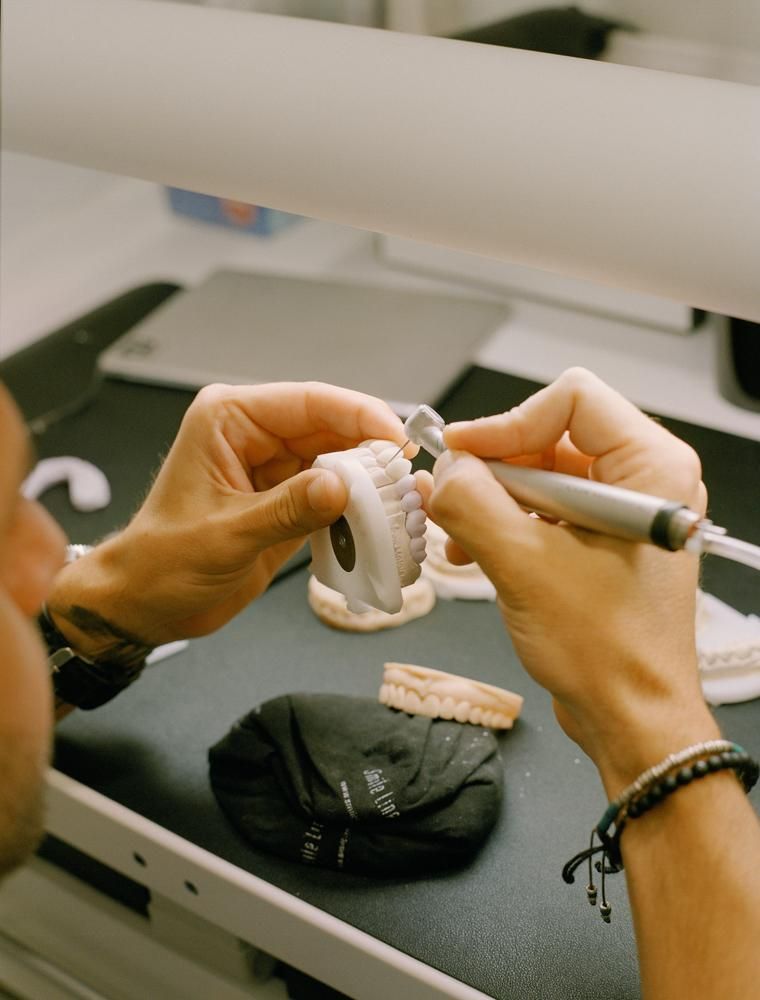 Naturally, the Loro Piana of teeth is not cheap. A consultation for his specially crafted veneers runs $500. Then, if a patient decides to invest, they’ll do so to the tune of $4,000 per tooth. With such a spendy barrier to entry, Apa’s New York clients tend toward the celebrity crowd while, he says, his Dubai practice beautifies the mouths of royalty. [Apa is the sole owner of the practice after buying dentist Larry Rosenthal’s New York practice in 2014, and it and its satellite offices form the Apa Aesthetic group.]
Apa loves his high-profile clients, featuring them—if they agree, of course—on his lively Instagram account. There’s Teri Hatcher with a cherry pie. Here’s a clip of Real Housewives of New York City’s Ramona Singer on Watch What Happens Live, braying proudly to Andy Cohen about her new smile. He’s done the teeth of a number of "Bravolebrities," in addition to Singer, and in fact credits Kyle Richards, a star of Real Housewives of Beverly Hills, as the reason he decided to open a Los Angeles outpost.
Richards, who discovered Apa on Instagram, says, "I was blown away by his transformations. I had never really thought about my teeth that much until I saw Dr. Apa’s work," she says. After Apa showed her what her smile could look like, she decided to have the work done. "People are always asking me what I have done [and] they can’t put their finger on it. I feel like I look much younger, and I’m so happy that my smile finally matches my mood." 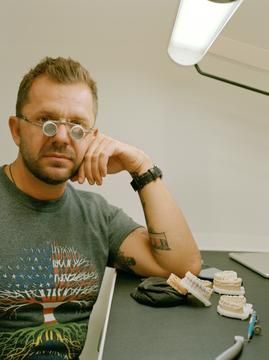 Jersey Shore’s Vinny Guadagnino is another client. "They’re cutting edge," he says of his experience with Apa. "You kind of feel like you’re in an episode of Black Mirror when you walk into their office because it’s futuristic."
The way that Apa and Murilo, as he prefers to be called, work together is what makes their practice so unusual. Apa is the cosmetic dentist, which means that he assesses his potential client and shows them what their new smile could look like. Then, during the next appointment, he fits a temporary smile in place, after working directly with Murilo to create the teeth. It’s unusual for a dentist to have his ceramists working in the same office.
"I’m able to say to him, ‘You see how much shadow is in the mouth? Do whatever you do to make that look white.’ It’s an art," Apa says of Murilo’s work. "I just have to say, like," and here he makes a gobbledygook sound for comic effect, "and he goes, ‘Oh, OK.’ We can have a conversation and people around us are like, "What?" but we know what we’re saying," Apa says.
Apa knew from a young age that he wanted to be a dentist. He had originally wanted to be a pediatrician, but when he contracted a mysterious liver disease at age 5, he changed his mind after hearing his mother sobbing on the phone to his doctor pleading with him to save her son. "I remember listening to that phone call thinking, like, ‘Sh*t, I do not want to be on the other end of that phone. That is terrible,’" he says.
If you find it extraordinary that a 5-year-old would be planning his career with such focus, well, "there’s something called otherness. It’s a certain trait in people that feel, from a very young age, that they are intellectually mature," Apa explains. 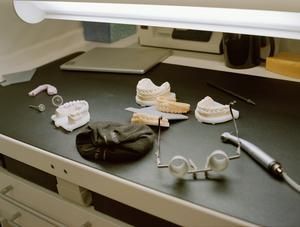 Murilo’s father ran one of the biggest dental technician lab in Brazil. "I’ve been in the lab since I was a kid," Murilo says. "I grew up making teeth."
Murilo focused on the more specialized aspects of the work his father did—a mass-produced product that offered dentists fast and low-cost teeth for their patients, but not at all customized. Seeing a hole in the market, he began doing custom work in his father’s lab. Eventually, he struck out on his own. He opened his own lab specializing in high-end work and later a school in Brazil, Murilo Calgaro Dental Design Institute, where the next generation of master dental ceramicists are trained. The school now provides a pipeline of talent, crucial to the growth of Apa’s practice.
In August, Apa opened an office in Los Angeles, and the business have plans for outposts in Miami and London. "It’s nice to be doing smiles for the patient," Murilo said, but that’s not what convinced him to leave Brazil to work with Apa. "It’s being connected with him—you’re excited to be here every day," adding, "It’s not only me. Like, you feel that everybody wants to join this adventure."
Copyright ©2019 Dow Jones & Company, Inc. All Rights Reserved. 87990cbe856818d5eddac44c7b1cdeb8
Measure
Measure