The First Amendment Is for Neo-Nazis, Too

Richard Epstein says that curbs on ‘offensive’ speech are unworkable and would turn the public square into the grievance Olympics. 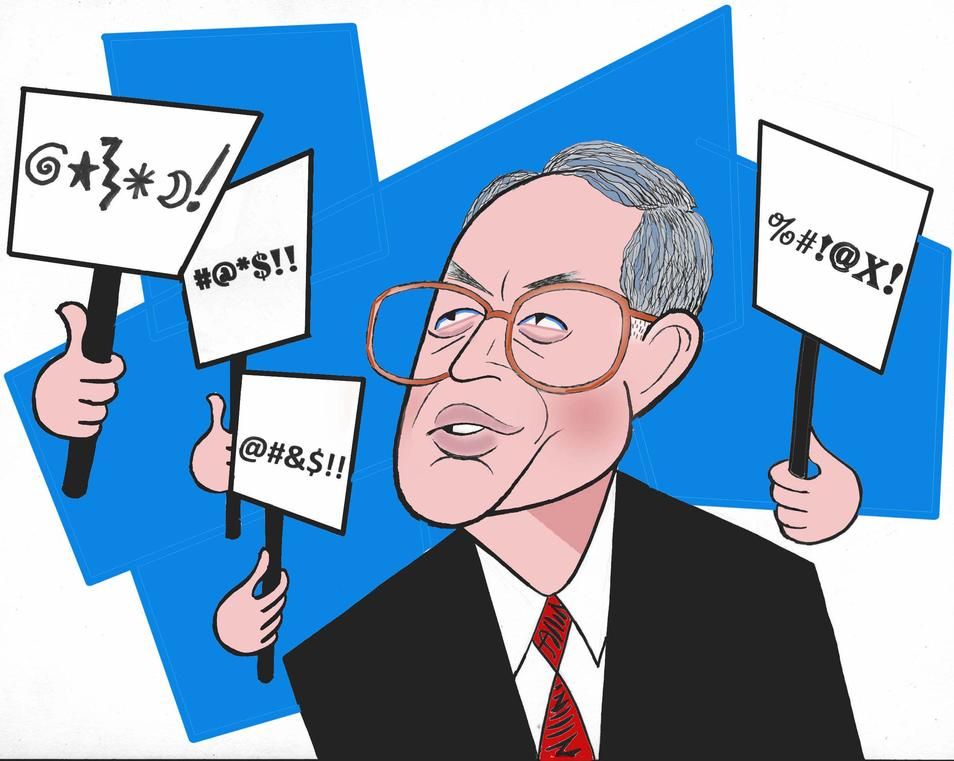 Unfazed by a stream of hustling residents, chatty doormen, leashed dogs and well-born children, Richard Epstein holds forth in the lobby of the building where he lives, just off Manhattan’s Central Park. I worry about the background hubbub spoiling the recording of our conversation, but Mrs. Epstein—with good reason—has ruled their apartment out of bounds. She is packing and fussing for their son’s wedding, to take place four days later, and doesn’t want us underfoot.

The theme of our conversation is freedom of expression under the First Amendment, and there’s relish in discussing the subject with a man who talks in long, long sentences uttered without pause for breath, as if expression were a form of physical exercise. Mr. Epstein, a professor at the University of Chicago and New York University, is among the Anglo-American world’s foremost legal academics. Although often lauded as America’s leading intellectual libertarian, he prefers to describe himself as a "classical liberal." With the violence in Charlottesville, Va., still fresh in the mind, Mr. Epstein is concerned that the debate on free speech has taken an unwelcome turn. The American left, he says, is pushing hard for curbs on "offensive" speech, and "no good will ever come of that."

Mr. Epstein cites with evident distaste a recent New York Times op-ed by K-Sue Park, a fellow in critical race studies at the UCLA School of Law. Ms. Park lamented that the American Civil Liberties Union had defended the right of the white-supremacy group behind the Charlottesville protest to organize its march. The ACLU, Ms. Park argued, needs to "rethink free speech" and stop standing up for people with offensive views.

Perhaps you see the problems here. "There are certain harms that are nonactionable," Mr. Epstein says, "and offense is one of them. If I say something that you find duly offensive, you may protest, you may speak—but what you may not do is to sue me in order to silence me, or to get compensation from me." Counterspeech is "the appropriate ‘remedy’ under these circumstances; suppressing speech is not."

Mr. Epstein imagines a society in which "offensive" speech is curbed: "Everybody offends everybody a large fraction of the time. So, if I am insulting to you because you’re a progressive and you’re insulting to me because I’m a conservative, and if we allow both people to sue, then neither can talk." Those who advocate controlling speech, he says, tend to want only their sense of what’s offensive to count, and nobody else’s. Yet the "fundamental tenet of classical free-speech law is that the rules ought to be ‘viewpoint neutral.’ Nobody can use force against anybody, regardless of his viewpoint; but anybody can express his opinion, irrespective of how offensive everybody else will want to regard it."

Even more complicating, controversial speech often isn’t conducted between two people alone but is shouted from a soapbox. How much offense is required before government pulls the plug? "The moment people start to speak publicly," Mr. Epstein says, "there are 20 different views that you can take. Some will be deeply offended, some indifferent, others will be strongly pro. And the last thing you want to let the government do is to decide which of the two, the three, or the 10 interest groups is the one that ought to be able to dominate and to control the particular discourse."

Some on the left, purporting to be mindful of the First Amendment, insist that what matters is severe offense. Mr. Epstein points to "the weird incentive effects" this creates. "People now have every motivation to ratchet up their level of indignation in order to say, ‘Look, you really hurt me,’ " he says. "As a result, you make racial, ethnic, religious and social sensibilities an art form." One recent technique of doing this is calling out the "microaggression," by which he says people mean: "You may think that it’s small, but it goes to the very core of my particular being, and so it’s wrong and shouldn’t be allowed."

Microaggressions make Mr. Epstein despair. Once you allow them, he asks, "are you going to allow them against everybody? At which point nobody can talk. So, you have to have preferences." He fears what will come next: "You drop the ‘micro,’ keep the ‘aggression,’ and announce that since you’ve aggressed against me, I can now use force against you in self-defense." This is part of the "modern left-wing First Amendment law," he says, which holds that "anything you say that offends me is a form of violence, to which I can respond by the use of force." The American left, he adds, "has become very solipsistic, and so all of their particular harms are enormous. And for those who are on the other side of this arrangement, they don’t care at all."

In Mr. Epstein’s view, the best response to this push is to continue to underline what free speech truly means in America. We need to "go back and look at what Justice Robert Jackson said about free speech in Barnette in 1943." That was the case in which the Supreme Court held that public schools could not compel Jehovah’s Witnesses to recite the Pledge of Allegiance.

It was a reversal of precedent, Mr. Epstein explains. In a 1940 decision, Minersville School District v. Gobitis, Justice Felix Frankfurter, "the son of immigrants, very much a kind of American loyalist, said that it was a libertarian fantasy to assume that Jehovah’s Witnesses could simply refuse to speak under the grounds of conscience." It showed, Mr. Epstein says, "a genuinely authoritarian streak in our friend Frankfurter."

Justice Jackson had a "more subtle mind, and he believed that if you’re a Jehovah’s Witness, and you thought that saluting the flag was a form of idolatry, you could stand aside." As Mr. Epstein sums up the principle: "It doesn’t matter whether our views are high or low, this way or that—it’s not the job of the government to tell us what they ought to be."

He contrasts Barnette with the temper of the present time. "Justice Jackson’s wasn’t the modern position, which says, ‘Since one person dissents from it, nobody can say the Pledge of Allegiance in class.’ " The older accommodation was that you were given "a painless pass, but you had to suffer the offense of watching other people do things that you did not want to do. Now, we basically shut everybody else down if you take offense."

Justice Jackson’s view of free speech is "pretty well secure in the judiciary today," Mr. Epstein says. Judges are careful to distinguish between persuasion and communication on the one hand, and threats of violence on the other. But, Mr. Epstein says, "there’s a very large and angry left-wing group which is not willing to accept that view," at least on its own home turf—the academy. He cites the conservative writers Heather Mac Donald and Jason Riley (contributors to this page), who had invitations to speak on campus rescinded under pressure, as well as the social scientist Charles Murray, whose March appearance at Middlebury College was disrupted and the professor who moderated it physically battered.

He also mentions the provocateur Milo Yiannopoulos, who was run out of Berkeley in February by intolerant leftists. Although Mr. Epstein says he considers Mr. Yiannopoulos a "dreadful human being," he also doesn’t think a peaceful speaker should face rioters—who, in this case, caused an estimated $100,000 of damage.

The real question, Mr. Epstein says, "is not what we believe, it’s what we’re prepared to put on the line. The moment you start yielding to this sort of thing, it’s just an encouragement for the other side to shut you down. Berkeley should have said: ‘We’ll call in reinforcements, we’ll bring out the National Guard if necessary, but we’re not going to allow any group to intimidate and change the way in which campuses work.’ "

Still an active teacher at 74, Mr. Epstein tells me a joke he sometimes uses in class. It comes from a 1950s comic strip. "I go to the top when it comes to sources and material," he says slyly.

Jughead, a known mooch, comes to Archie’s house and asks: "Archie, do you believe in free speech?" Archie says sure. Jughead replies: "So you don’t mind if I use your phone to make a long-distance call?"

"Why is this funny?" Mr. Epstein asks. "Because freedom of speech means that you have the right to use your own resources to advance your own causes. But it doesn’t give you, in the name of free speech, the right to take somebody’s telephone, somebody’s house or somebody’s anything in order to use it for your own purposes."

In effect, Mr. Epstein says, the notion of freedom of expression is embedded in a much larger and comprehensive system of property rights. Does the Supreme Court believe that? "In the case of individual speech, the answer is yes," he replies. "But there’s another dimension to speech, which is the question of campaign finance and related topics. There’s a very deep cleavage of opinion, with progressives thinking that big business in speech is every bit as bad as big business everywhere else, so you’ll have to put limits on their ability to spend."

This progressive model typically assumes all big companies and rich people act the same way. "But one of the things we know," Mr. Epstein says, "is that there’s absolutely no uniformity among the rich as to how they view and spend their money. There’s New York liberals and Texas conservatives—and of course the American business community is undergoing a tectonic shift. The leadership of all the big tech companies is essentially of the left." He cites Bill Gates and Mark Zuckerberg, as well as Google’s CEO, Sundar Pichai, whom Mr. Epstein calls "an economic illiterate."

Mr. Epstein reserves special ire for Google. He cites the case of James Damore, the engineer fired from the company this month for suggesting in a memo that biological factors might contribute to the lack of women in the tech industry. Mr. Pichai was "saved from greater embarrassment by Charlottesville," Mr. Epstein says. "People stopped talking about Google because they had more important things to talk about."

He thinks the Google firing illustrates that the notion of inadmissible "offensive" speech now permeates both the public and the private spheres. "Google is basically massively intolerant," he says. "Here was a guy, the data analyst, who was not against diversity. He said he wasn’t. So many Americans who are offended by the kind of ‘diversity inclusion’ methods you have at Google are not against diversity, nor against inclusion.

"They’re against people telling them how to be diverse, and exercising a moral superiority over them which forces them to grovel."

Mr. Varadarajan is a fellow in journalism at Stanford University’s Hoover Institution.