His overstatements reveal the weakness of the Democratic case. 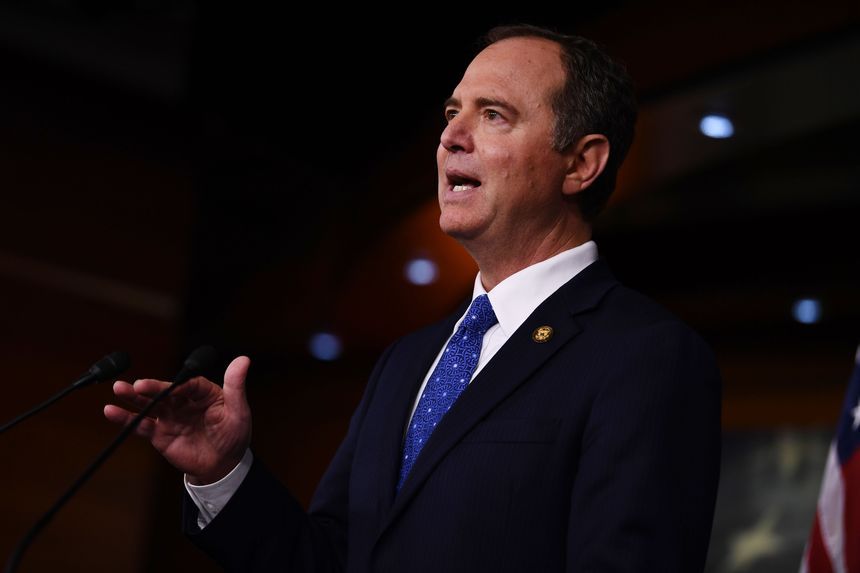 Adam Schiff speaks in Washington, D.C, Dec. 3. Photo: brendan smialowski/Agence France-Presse/Getty Images
These columns warned that once the machinery of impeachment was up and running, it would be impossible to stop. And so on Tuesday Adam Schiff released his House Intelligence Committee report on Ukraine that finds President Trump guilty of playing domestic politics with foreign policy. But it’s clear the President’s real sin is being the willful, undisciplined Donald Trump voters elected.
The bulk of Mr. Schiff’s 300-page opus is a prosecutorial account of Mr. Trump’s four-month attempt to persuade new Ukraine President Volodymyr Zelensky to announce investigations into corruption and Ukraine’s role in the 2016 election. It is not a flattering tale, and it would make a compelling plank in a 2020 campaign indictment of Mr. Trump’s character and poor judgment.
But Mr. Schiff’s report casts himself and his cause as much grander. He is Adam at the bridge of our republic, heroic defender of American democracy. His introduction is worth quoting at length to capture his pretensions to nonpartisan statesmanship.
"The decision to move forward with an impeachment inquiry is not one we took lightly. Under the best of circumstances, impeachment is a wrenching process for the nation. I resisted calls to undertake an impeachment investigation for many months on that basis, notwithstanding the existence of presidential misconduct that I believed to be deeply unethical and damaging to our democracy," he writes.
But in the end he heard the call of duty:
"In making the decision to move forward, we were struck by the fact that the President’s misconduct was not an isolated occurrence, nor was it the product of a naïve president. Instead, the efforts to involve Ukraine in our 2020 presidential election were undertaken by a President who himself was elected in 2016 with the benefit of an unprecedented and sweeping campaign of election interference undertaken by Russia in his favor, and which the President welcomed and utilized."
Here Mr. Schiff reveals the real impeachment motivation: Mr. Trump never would have won in 2016 without Vladimir Putin’s help, but Robert Mueller failed to prove that. So Democrats are settling for the lesser melodrama of Ukraine, an unchained Rudy Giuliani, and Joe and Hunter Biden. The details may not add up to much more than Mr. Trump obsessing about what he thinks Ukraine did in 2016, but it’s all the Democrats have.
The report’s summary sentence reveals the weakness of its case with overstatement: "The president placed his own personal and political interests above the national interests of the United States, sought to undermine the integrity of the U.S. presidential election process, and endangered U.S. national security."
Yet every President seeks some political advantage in pursuing foreign policy. That includes Barack Obama when he asked Dmitry Medvedev to tell Mr. Putin to go easy on missile defense until after the 2012 election.
As for undermining election integrity, that was Bill Clinton when he vacuumed foreign campaign contributions from the Riadys and multiple other foreigners in 1996. Or Hillary Clinton in 2016 when her campaign financed Christopher Steele to spread Russian disinformation on Mr. Trump to the media and FBI.
Mr. Trump, in his reckless way, asked President Zelensky for the "favor" of investigating Joe Biden and tried to delay military aid. But as Senator Ron Johnson relates in his recent letter that is a more even-handed account of events, Mr. Trump’s attempts were resisted across Washington and ultimately failed.
None of this undermined elections or "endangered" U.S. national security because there was no investigation and the aid was never withheld. Even if aid had been withheld, that would merely have put U.S. policy back to where it was when Mr. Obama denied Ukraine lethal military aid for several years until Mr. Trump provided it.

The Starr report laid out irrefutable evidence that Mr. Clinton lied to a grand jury and tampered with witnesses. Those were criminal offenses. The evidence that Richard Nixon obstructed justice was also clear once the tapes became public. By contrast, Mr. Schiff’s report mentions no specific crime and is full of too many inferences and overbroad assertions to provide a convincing impeachment case.
This explains why Mr. Schiff’s report won’t gather a single Republican vote, and why this impeachment will remain partisan. On this score, we had to smile at Mr. Schiff’s high-toned invocation of the Founding Fathers’ fear of "excessive factionalism." He claims to be defending "democracy" against "the power of faction" that would dare defend Mr. Trump against impeachment. Like the President, Mr. Schiff lacks the virtue of being self-aware.
Politics, U S A