Author Darryn King, Published Sept. 5, 2019 9:57 am ET
On a recent afternoon, I strapped on a device that looked like a chunky Fitbit.
"It’ll be much sleeker than this," the writer and neuroscientist David Eagleman said, switching it on. "This is like an old clunky Terminator version of it."
As we talked, four micromotors, embedded in the wristband, purred to life. The device was picking up the sound waves of our conversation and generating minute, corresponding vibrations around the circumference of my wrist—turning sound waves into something I could feel. With my fingertips pressing on it lightly, the contraption tingled to the touch. I raised my voice, testing it; the vibrations grew stronger. During pauses or gaps in the conversation, they stopped.
"It’s essentially transferring your inner ear to your wrist," Dr. Eagleman said.
Dr. Eagleman, the host of "The Brain," a 2015 series on PBS, and a scientific advisor on the HBO series "Westworld," about sentient robots run amok, has long been fascinated with the way the brain works—namely, how the puffy, three-pound jelly-like mass in our skulls converts information into electrochemical signals.
"The brain is locked in silence and darkness inside of the skull and yet it puts together this whole world, with all its rich colors and sounds," he said. "At some point I started chewing on this issue of, OK, well, gosh, could you get the data in there by some other route?"

Dr. Eagleman founded NeoSensory in 2015 in Palo Alto, Calif., not far from Stanford University, where he’s an adjunct professor. Its aim is to develop haptic wearables that offer new ways of experiencing the world. The first of these is the Buzz, a device geared toward allowing the hearing impaired to perceive the auditory world via haptic vibrations. NeoSensory plans to start selling the Buzz in January for $630, comprised of an upfront fee of $150 and $20 monthly payments for two years.
People with hearing impairments who tested the Buzz said they could recognize noises like oncoming vehicles, crying babies, barking dogs, opening doors, guitar music—even the high-pitched "ding!" of a toaster oven—through a range of distinct vibrations. Users said they felt more aware of their surroundings and more connected to others in conversation. Dr. Eagleman said the Buzz is not a medical device, so he does not anticipate that it will need clearance from the U.S. Food and Drug Administration in its current form.
NeoSensory’s offices are classic startup: takeout containers, whiteboards filled with computer-language hieroglyphics, dozens of prototypes spilling their technological innards. The company has raised $16 million in venture capital and has 21 employees, including a fashion designer, an industrial designer and experts in psychophysics, a field that focuses on the relationship between objective physical stimuli and subjective sensory experiences.
In recent years, new technologies that overlay our experience of the world visually, such as augmented-reality glasses, augmented-reality headsets like the Microsoft HoloLens, and heads-up displays in cars, have emerged with varying degrees of success. But our eyes and ears are overtaxed for everyday tasks, Dr. Eagleman said. His conviction was that the brain of a hearing-impaired person could be trained to experience patterns on the skin as what’s called a qualia—a personal and subjective internal sensory experience of external stimuli. "Everyone who has worked on addressing hearing loss in the past has, quite reasonably, concentrated on the ears," Dr. Eagleman said. "We’re concentrating on the brain."
Companies are already using haptic communication—think of the vibrations of an iPhone, a Fitbit or a rumbling videogame controller. But the Buzz employs a more advanced vocabulary. It works by first picking up sound waves via a microphone. An embedded chip breaks the frequencies into 128 bands, then four motors stimulate the wrist in different patterns. The device uses noise-cancellation algorithms to handle cacophonous environments, Dr. Eagleman said. The hum of an air conditioner would stop producing vibrations in 30 seconds, much like ears stop noticing sounds that fade into the background. As the Buzz buzzed on my wrist, rising and falling with the volume of our voices, I could understand how the bleat of a car horn would feel different from the thud of a door slam.
Vibrations are a useful way of conveying information to the brain, according to Heather Culbertson, an assistant professor in computer science at the University of Southern California, who specializes in the design and control of haptic devices. "It’s very natural for people to detect patterns of vibration, and detecting changes in patterns of vibration," she said. But sensitivity to constant vibrations lessens after a long period of exposure, she said. "If you’re feeling something vibrating for quite a long time, your ability to feel those vibrations goes away." 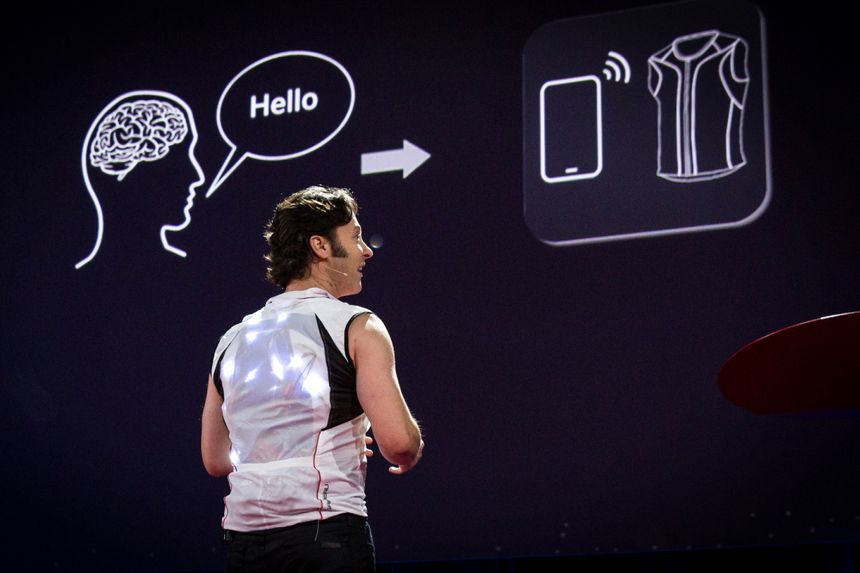 Neuroscientist David Eagleman gives a TED Talk in 2015 while wearing a prototype of the Vest, or Versatile Extra-Sensory Transducer. Photo: Bret Hartman/TED
Dr. Eagleman said that the Buzz generates the sort of pronounced, localized sensations that stick out in a user’s perception. It’s like the sensation of your feet in your shoes—not something you notice until, for example, a pebble gets stuck in one. "You become immediately aware of the data stream again," he said.
After wearing a prototype of the Buzz for an average of 12 hours a day for 40 days in 2018, Myrriah Rivera, 32, of Hayward, Calif., became a convert. Ms. Rivera, who is unable to work, said her hearing has always been bad, likely because of audio-processing nerve degeneration from childhood infections. She said she also suffers from epilepsy that causes her to drop to the floor if she’s startled.
The Buzz made her less afraid to leave the house and made it easier to identify when her cat, Spirit, meows for food. Though she wasn’t technically hearing, the vibrations felt like the equivalent of different sounds. "I can hear birds again, or my nieces laughing across the yard—things I hadn’t heard for years or ever before the Buzz," she said. "I can walk through the world more confidently, because I have warning of all those little life things." Though she would have appreciated the device sitting flatter on her wrist, she said she would buy one.
Eventually, Dr. Eagleman intends to use the hardware to translate a range of data, not just sound waves, into touch. The Buzz might buzz according to activity on social media or the stock market. NeoSensory has also been working on the Vest, or Versatile Extra-Sensory Transducer, a higher-resolution device with 32 motors that fits on the torso. NeoSensory also plans to allow programmers to build their own applications for the Buzz. "What’s interesting is that the community is going to think of 20,000 other things that we hadn’t thought of," Dr. Eagleman said.
Corrections & Amplifications
The Buzz will cost $630, comprised of an upfront fee of $150 and $20 monthly payments for two years. An earlier version of this article incorrectly said the device would cost $150 upfront or $20 a month on a lease-to-own plan. (09/06/2019)
Copyright ©2019 Dow Jones & Company, Inc. All Rights Reserved. 87990cbe856818d5eddac44c7b1cdeb8
Measure
Measure
Software